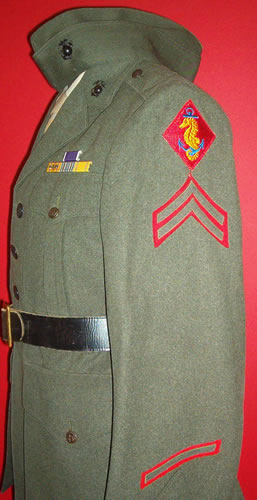 In September of 2005, I was privileged to share an unusual story about a very brave Marine who fought in World War II. The story came to me through his daughter Vickie Kelber, who was then a councilwoman on the Marco Island City Council.

The story began: Marco Island’s City Council Chairwoman Vickie Kelber received an amazing message this week; in fact, it came out of the blue: cyberspace. It was something like hearing your message in a bottle – or a jacket pocket in this case – had been found.

Vickie received an e-mail message from an unknown person, concerning her father, Victor. Christine Scherrey of Fort Smith, Arkansas, the author of the message was then a 24-year old law student in her last year at the University of Arkansas in Fayetteville.

Christine said it took her a year to find the Kelbers, to tell them that she had in her possession a jacket that belonged to Marine Corps Corporal Victor Kelber, who served on the USS Hornet during World War II. She said the purpose of her letter was not only to tell them she had the jacket, “But to let you know that your father’s sacrifice will never be forgotten.” Christine collects Marine uniforms from WWI to Vietnam, all of which are identified with their owners. She does presentations at schools, local libraries, museums, and veterans’ organizations.

“It is a real honor to be able to have a uniform from such a brave man,” she said, explaining that she had been trying to research him for a year. Christine confessed to a fascination with named military uniforms that began when her parents took her to Pea Ridge National Military Park in Arkansas, a 4,300-acre Civil War Battlefield that preserves the site of the March 1862 battle that saved Missouri for the Union.

“I was fascinated with the items, particularly a named uniform. From that day on, it was all over. I admit it was very hard being a young girl fascinated with military history, particularly the Marines who captured my heart after I heard that my aunt’s father was a medic Navy Corpsman with the 1st Marine Division in World War II. He’s still alive.”

As Christine matured, her female teachers told her it was inappropriate for a girl to be interested in such things but her mother’s best friend, Rita Swift, was always supportive of her research of wars and of preserving the history of the men and women who fought them. After she died Christine discovered her husband, Colonel Dean Swift, U.S. Army Corp of Engineers, had been killed in World War II and was buried in the Philippines.

From then on she decided to collect only named/identified items that she could research, and keep the veterans’ stories alive. While searching on the Internet she saw a uniform from a ship detachment. The seller, who she believed was from Virginia, didn’t mention the jacket having a name in it.

“However, something just told me to look further into this one, even though I never give a second glance to unnamed items. I asked the seller. He responded saying it had a name in it: ‘V.L. Kelber’ in official Marine Corp stamp.”

Christine did a genealogy death search but found nothing. She then checked the World War II Memorial Registry: there on the list was Victor L. Kelber. The information matched the uniform exactly and she knew she had the right person.

Victor Kelber was an 18-year-old from New York City when he enlisted in the Marine Corps on January 27, 1940 and attended boot camp on Parris Island. His first duty station was the Naval Ammunition Depot in Hingham, Mass. He attended sea school and was a member of the Marine detachment aboard the USS Hornet CV-8 from the day it was commissioned, October 1941 until the day it went down, October 26, 1942. He saw action at Midway Island, Buin-Faisi-Tona Lai, Guadalcanal, and Santa Cruz Island where he survived the sinking of the USS Hornet but was wounded and spent 14 months in hospitals in Balboa, CA and in Brooklyn, NY.

After his recovery, his wartime efforts in the states included being assigned to Headquarters, Eastern Sea Frontier as Admiral’s Orderly to Admiral Andrews and his successor, Admiral Leary. He did naval public relations work and attended NCO chemical warfare school.

When Kelber was discharged from the hospital and shipped to Okinawa he was asked to turn in his uniform, as it wasn’t used there. The patch on the uniform is from his ship detachment. When he returned after the war, he was issued a new uniform with the Third Amphibious Corps patch.

“I bought the jacket,” Christine said, “and then I attempted to locate the person who 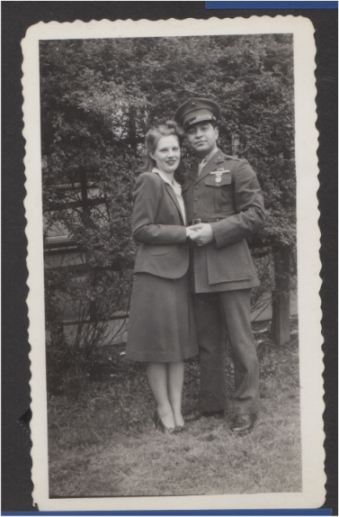 listed the registry memorial: Elsie M. Kelber, Lakewood NJ. I found that she had passed away in 2002 and then began a search of all Victor Kelbers and V. Kelbers in the Lakewood, NJ area. I didn’t find anyone.”

Unable to find a record of Kelber’s death, she called the Marine Corps, wrote to their Personnel Records center, and combed the Internet to see if she could find him. She persistently called every V. Kelber she could find. After more than 20 calls she was no further ahead: “No one here by that name” or “It’s not me” were all she heard.

“If I did this research for myself, perhaps I would have given up there,” she said. “But, I don’t do it for me. I do it for the brave men and women who guarded my freedom so many years before. They didn’t give up on me, so I wouldn’t give up on them. Thus, I continued researching.”

Finally Christine found a listing on the USS Hornet veteran’s page by Vickie Kelber, regarding her father. It was the first sign she had that Kelber had a daughter, so she tried e-mailing the address on that site. After several hours, it was returned to her e-mail address saying, “User Unknown.” Knowing she was so close, she said she just couldn’t give up. She began a search for all the Vickie Kelbers she could find. During this search, she discovered the Collier County Government site, where veterans of World War II were interviewed and photographed. She realized the Kelbers could be in Florida and did a search for Vickie in that area.

“That is when I found she was listed for Marco Island City Council,” she said. “There wasn’t a direct e-mail, so I had to send it to a general city address. I just hoped someone would get it to her.”

“Much to my great surprise, the year of research paid off when I finally received an e-mail Vickie Kelber.”

Kelber said, “I was incredulous. Not that I didn’t believe it, but just about a year ago we were contacted by my father’s first cousin whom he had never met, out of the blue – again, a miracle of the Internet. He discovered his entire maternal family history, cousins he didn’t know he had. So, you can imagine how I felt when we had a second occurrence!”

Christine requested a photo of Kelber to display next to his jacket, so the children and other viewers would get to put a face with a name. Finding that Victor was still alive, she asked if he would be willing to share any of his military stories. Aside from service history, she wanted to know his reasons for sewing down the collar and pockets on his Marine uniform.

Victor Kelber, “a man of few words”, said the appearance of his uniform was, “Really shocking – never expected something like that. I’m glad she found it – it’s a piece of history.”Victor passed away in 2006, three days before his 85th birthday.

That story is touching enough, but it doesn’t end there. On December 21, 2009 Vickie Kelber received another surprise.

“Guess what arrived in the mail today?” she wrote. “ Remember that article you did about my father’s uniform?”

Here’s what Christine wrote to Vickie:
“Enclosed is something very special for you. I’m not sure if you knew but your father and I had talked a couple times prior to his passing. He told me that the uniform I was honored caretaker of was one that meant a great deal to him. He wore it right after his discharge from the hospital and during his recovery. It was modified to have pockets and collars sewn down so the admiral your dad was assigned to wouldn’t complain he wasn’t perfectly dressed.

“I knew it meant a lot to him as he had wanted to keep it. But, for some reason, he said he was forced to turn it in when he was reassigned. Oddly, it sat for over 50 years until I was fortunate enough to rescue it from a ‘rag’ seller in E-Bay (if not sold it was to be made into rags with other unsold items). And so it came to be that I gained two amazing friends – you and your father – and I got the honor of caring for a piece that meant so much to this brave Marine. Your dad told me he was sad he didn’t have such a uniform to leave for you. He mentioned he planned on being buried in his Blues. I promised that when the time was right and when least expected, I would pack it up with care and return it home. And so, it is only fitting that after all this time, an item that represents the sacrifice he made for his country, his family, and future generations be returned to its rightful home.”