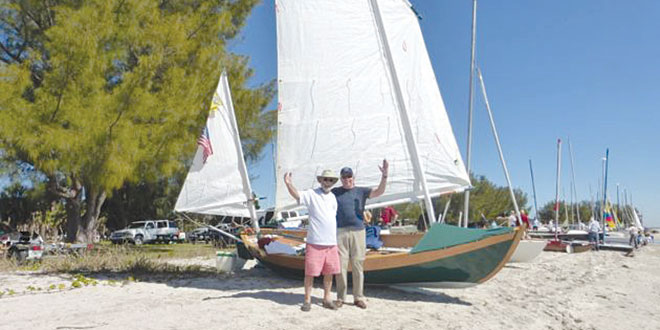 The Day Before the Race. SUBMITTED photoS

The sheer excitement of sliding down the backside of six feet of following sea in a small but well crafted open sailboat for the first time was an exhilarating awakening to the powerful forces of nature. We methodically rose on a wave’s front side, reached its crest and accelerated, only to skate into its trough. We would slow and repeat the cycle over and over. Watching the froth bubbling, smelling the fresh salt air, hearing the wind gusts fill our sails and feeling the constant rhythm of motion glued a grin on my face and an adrenalin rush in my core. I wouldn’t trade the experience for the world.

We expected the race to take 29 hours; we completed it in 12 hours and 59 minutes. The scramble began with a light breeze, but by the time we passed the entrance to Big Sarasota Pass, conditions changed. Winds rose to a steady 15 mph with gusts to 20 mph.

It was the Watertribe Ultra Marathon for small paddling and sailboats. It began at the high water mark of the north bank of Tampa Bay at Fort De Soto and ended at Cape Haze Marina on Lemon Bay near Englewood. It was a distance of approximately 62 miles. Due to the great race tactics and sailing skill performed by our master boat builder and captain, Clayton Seelgen, better known by his Watertribe race name Clam, we finished first in our class and fourth out of 24 boats overall. I’m John Scott. I was the mate with very little sailing experience. I’m known as Screaming Frog.

Our race boat, The Viola May, is a 19 feet 6 inch Caledonia Yahl that was lovingly and expertly hand crafted by the son of a boat builder, former high school wood shop teacher and captain of our race boat, Clayton Seelgen. The building took many hours of painstaking 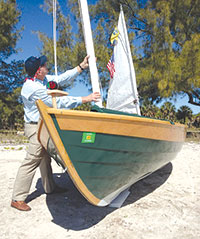 craftsmanship over a year and a half.

Several months prior to the race, Clayton approached me. With my meager sailing experience he was too kind to admit that he was working his way toward the very bottom of his list of potential sailing mates. I, Screaming Frog, am a true water lover with considerable experience in small open boats; namely canoes and kayaks, but almost no experience in small sailboats. I have always loved high adventure and learning something new, especially if it had anything to do with being in on or around the water.

Twenty-nine non-stop hours hours in a small open sailboat over the first two days of March in Central Florida’s Gulf of Mexico – when the nighttime temperature can be in the 40s and winds can be anywhere from calm to gale force – isn’t foolish is it? No! It’s just high adventure.

Our first meeting was a dry land overview of the boat and its working parts – one of which was the head – a plastic paint bucket. Over the next few months, we practiced rigging, reefing the main sail, coming about, jibing and rowing. We sailed all points of sail and most wind conditions. We failed to find a day with high winds.

Eventually, my training involved a sort of final exam. I am certain that Captain Clam meticulously planned this as a final test of my performance under fire. It was a week and a half before the race and we were sailing the Gordon River in Naples. We were coming back from the Gulf. Captain Clam had obviously planned for one of the two gudgeons that hold the rudder to the stern to work loose, causing the rudder to tilt and break off, leaving us without steering. Upon this well-planned event, Captain Clam announced, “We don’t have 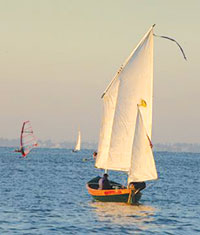 any steering,” as he crawled up on the stern to check out the problem.

We began to drift. Just as we finally dropped the mainsail and took to the oars, 42 feet of Hinckley Picnic Boat with five feet of wake sped past us only to turn immediately across our bow. We were at the intersection of the inter coastal waterway to Marco Island and, apparently, the picnic boat was in a hurry to get to the Snook Inn for lunch. Or was he paid by my captain to offer me this test? I must admit the experience was well worth the effort as we successfully, but less than flawlessly, recovered and rowed back to the boat ramp.

“We are out of the race. The gudgeons are custom made in bronze by a guy in Connecticut. We race next weekend and we don’t have any steering.”

Somehow my captain worked his magic. He found the part, had it shipped overnight and installed it just in time. The rudder performed flawlessly for the race. My captain still hasn’t admitted that this episode was just a final test of my reactions under emergency conditions.

Finally the big day arrived and the Viola May, according to the rules, was perched on the beach at the high tide line at Fort De Soto. At 7 a.m. the race began and we, along with all of the other entries, slowly pushed and struggled to get the 650-700 pounds of Viola May, including way too much food and gear, into Tampa Bay. Rules prevented our wives – or anyone else for that matter – from pushing. Eventually, we were successful and piled ourselves into the boat. Many of the lighter boats that could be carried or had special rollers had already launched and were half way across Tampa Bay as we

set sail with a light breeze from the northeast.

Our first goal was to cross Tampa Bay and to enter the Gulf of Mexico at the north end of Anna Maria Island. The water is extremely shallow off the beach at Anna Maria Island and all of the boats in our vicinity, except ours and a sailing kayak with outriggers, headed due west out to sea to avoid the shoals. I knew for sure that my captain had completely lost it as I watched the sea recede to what seemed to be only a foot or so beneath our keel. Running aground would certainly ruin our day, but the magician pulled it off again. We sailed across the shoals with ease and met our rivals gaining several minutes on the others in the pack.

We settled in and found that the Viola May handled extremely well running in a light breeze. We were slowly gaining on most of our fellow travelers; we sailed for several hours. Then, the wind receded, and the sailing kayaks with outriggers and peddles began to gain and pass us as did the sleek modern designed monohulls with a chute. We took to the oars to try to catch them with little success. Just as we began to become discouraged the wind picked up out of the north/northeast. We started to gain on the kayaks.

The wind continued to build, and by the time we were abeam Venice Inlet we almost had more wind than we could handle, so we reefed the mainsail and continued on. Because of the high winds, many of our rivals turned left at Venice Inlet and continued on the inside of the barrier islands where the wind and the waves were more accommodating. We considered doing likewise, but my captain finally said, “Sail on!”. This is where the fun began.

The wind was now at around 15

Unloading at the High Water Line.

mph with gusts up to 20 mph, and we were skating over the waves. As long as Captain Clam kept the Viola May just a little bit west of perpendicular to the following sea we were fine. In keeping the bow pointed just west of the wind we were slowly being driven further out to sea. To steer east too much would cause a jibe which would violently smash the sails in the other direction, causing the boat to steer sideway in the trough of a six foot sea. This definitely would ruin our day. We sailed on for several hours, and finally the wind receded and we raised our sails allowing us to be able to sail closer to the wind, and we continued on.

At sunset we could see Stump Pass, the entrance to Lemon Bay, and with the lighter winds we were able to gently jibe to make the pass as darkness was falling. My job as Screaming Frog was holding the GPS in one hand and the flash light in the other to find the day marks while Captain Clam manned the tiller. Then, the wind almost died. We couldn’t figure out why, but another boat came up behind us and passed us in the channel. We realized that they were rowing. I began vigorously taking to the oars, and even after demonstrating my superior rowing skills, we finished the race two minutes behind the passing boat.

Later, we found that the passing boat was in another class, so we actually finished first in our class of six boats and fourth overall in a group of 24 entries. Not bad for a new boat and an inexperienced mate. Both Clam and Screaming Frog slept well that night.

The next morning we received our “first in class” paddles from the Watertribe Chief. It was truly a weekend of high adventure for two young-at-heart septuagenarians who have little sense but much bravado.