A Lion in the East 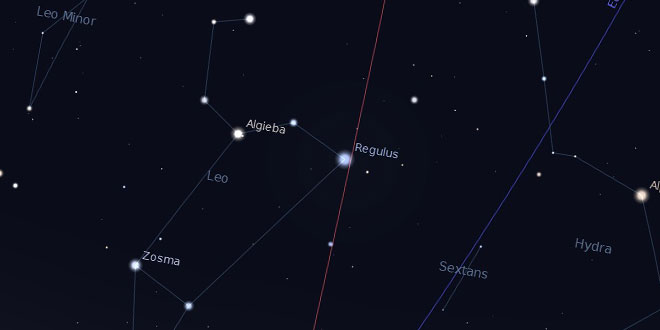 Rising in the east tonight is the constellation Leo the Lion. Leo is one of the brighter zodiacal constellations and quite easy to find; simply reverse the pointer stars direction in the Big Dipper and you land in Leo.

Leo is also one of the few constellations that bears some slight resemblance to the object for which it’s named. With a bit of imagination a crouching lion is revealed. Leo is also home to an asterism known as the sickle. It consists of the head and shoulders of the lion and really does look like a sickle – or probably for younger stargazers, more like a question mark.

Bright star Regulus lies almost exactly on the ecliptic where it is occasionally occulted by the Moon or rarely by planets and asteroids. In fact Regulus is due to be occulted by 163 Erigone on March 20, 2014; unfortunately, although visible in New York, it will be invisible from Marco.

Amateur astronomers tend to get a little bit excited when they see Leo rising, because the Virgo Supercluster rises just behind it. The lion’s tail points directly 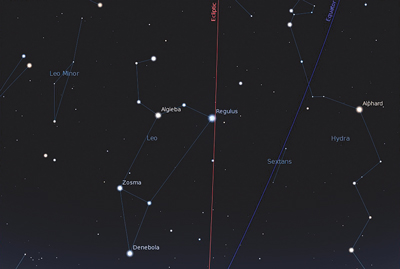 Facing East, 9 PM February 16th. Leo’s neighbor Hydra is such a long constellation it can’t fit completely into the picture.

towards it. The Supercluster consists of thousands of galaxies spread out over a fairly large area of sky, from Leo to Virgo; our own galaxy is a distant member. A handful of the brighter galaxies are visible in binoculars, but don’t bother trying until Leo rises much higher in the sky.

Speaking of binoculars, a pair will greatly enhance your stargazing. Almost any pair will do, although a pair optimized for astronomical use is the best (and most expensive!). Binoculars are described by two numbers: 7×35 are very common; 9×50 are better for stargazing. The first number gives the magnification; the second is the width of the lens in millimeters. Anything larger than 9×50 is difficult to hold steady due to its weight; image-stabilized binoculars are available but it’s probably just easier and cheaper in the long run to use a camera tripod. A useful pair of binoculars for general use can be had for under $100 from online vendors.