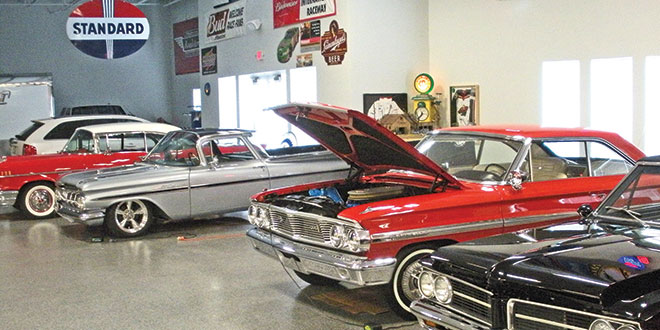 Steve Garske has been a car lover since he was a kid.

“I grew up with them,” said the Marco Island resident. “When I was 16, Mustangs and Camaros were all showing up. I couldn’t wait until September when all the new models came out. My first car was a ‘67 Mustang.”

College, marriage and then having a family kept him from fully indulging his interest by becoming a collector, but that all changed in 2000 when he purchased a Porsche and then a 1964 Chevy Malibu.

“And then I kind of got hooked,” said Garske, who recently erected an almost

12,000-square-foot building along S. Barfield Drive, across from the Shops of Marco, to house his collection, which now includes 14 cars, a rail dragster – sans engine, the exterior shell of a NASCAR racer and more.

The vehicles had been housed in a building in a suburb of St. Paul, Minn., where he and his wife had been living before purchasing a condo on Marco in 2010. He also keeps a couple of his treasured cars in Minnesota, where they’ve retained a home.

But unlike some collectors, the cars are more than show pieces that rarely touch a roadway. “I also like

to drive them all,” said Garske. “That’s the beauty of Florida versus Minnesota.”

The collection is dominated by cars from the good old USA, aside from two Porsches. There are two Fords and the rest rolled off the assembly lines of General Motors. But the GM-heavy isn’t indicative of any preference on Garske’s part.

Garske said he built the building because he and his wife Charlotte have increasingly found themselves spending most of the year on Marco and he wanted to have the cars nearby. “It’s only three miles

The exterior of Steve Garske’s auto storage facility, which sits off of S. Barfield Drive.

from the house so I can get in there anytime I want, very easily,” he explained.

He refers to the structure as his private “man cave,” a place where he maintains an office for his golf course accessory supply business, also space for his auto and sports related memorabilia, as well as a lounge area, complete with an expansive, flat-screen TV, that is ideal for, well, lounging.

While under the construction, the building, its exterior unadorned by signs, had some inquisitive residents speculating about its purpose.

“People have been curious and I guess word got out,” said Garske. “I’ve heard that people thought it was a museum.”