A Great Migration in the Water 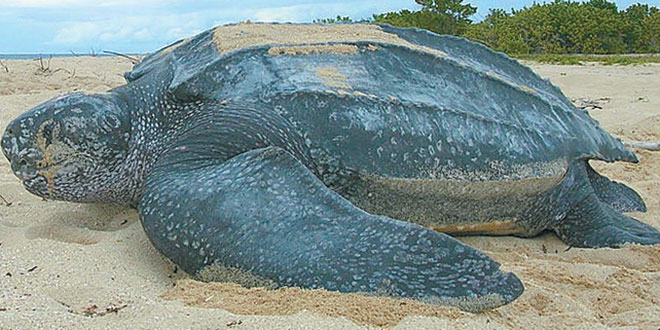 Submitted PhotoLeatherback sea turtles can reach 6 feet in length, weigh up to 2,000 pounds and dive more than 4,000 feet below the surface.

Last month I wrote about one of the great land migrations that takes place on our planet. It wasn’t so much about the long distance of the pattern, but more about the sheer number of animals that participate in this annual trek across Africa’s Serengeti Plain.

There are constant comings and goings throughout the year on land and in the air, but what about the sea? Yes, there are tremendous numbers of marine creatures that follow patterns as well. Since we are in turtle nesting season here in our area I thought it might be appropriate to discuss a rare visitor to our beaches.

Many of us are aware of the loggerhead sea turtles and the green sea turtles that come to South Florida to lay their eggs each year, but in the summer of 2015 something very special happened on Keewaydin Island.

The largest sea turtle on the planet paid a visit here and made a nest. Ninety-nine eggs were counted and 47 of them hatched. Two were still in the nest and rescued to confirm that the species responsible for this nest was a leatherback. There are two other recorded sightings of leatherbacks in the last 10 years, but this is the first known nest in Collier County.

This is the largest turtle on Earth and can grow to be 7 feet in length and topping 2,000 pounds. Its evolutionary roots can be traced back more than 100 million years.

Other sea turtles have a hard, bony shell on the back called a carapace. The shell of the leatherback is more flexible and has an almost rubbery texture, which may account for its ability to dive deeper than any other sea turtle. This softer shell and the ridges formed on the carapace help to give it a more hydrodynamic structure, allowing it to dive more than 4,000 feet below the surface.

Found both in warm and cold water, they have the widest distribution of all reptiles. They can maintain a warm body temperature even in cold water by utilizing adaptations to generate and retain body heat.

So what about their migration? Is it really that great? Yes!

Leatherbacks undertake the largest migration between feeding grounds and breeding areas than any other sea turtle. They can average more than 3,700 miles each way.

For example, on the Pacific side of the U.S., leatherbacks that have nested in New Guinea will travel the entire length of the Pacific Ocean to reach their foraging areas along the California and Oregon coasts. In the Atlantic, some of these will travel from Central America to the Carolinas, to areas of the North Atlantic before making a return journey.

Like other sea turtles, the female will return to the area of its birth to lay its eggs, usually about 85-90 at a time. They create a nest on the beach and the rest is up to nature. The eggs will incubate in the warm sand. A nest temperature of about 85 degrees will result in a mix of males and females. Warmer temps will develop females while cooler temps will result in males. A female might create several nests in a single season and will return again in two or three years.

Leatherbacks, when not nesting, are pelagic, which means they are found away from the shore, so it had to be quite a surprise to find a nest in our area last summer. Are they developing new feeding grounds in our shallow waters? Was this a once in a lifetime nest to be seen? Only time and continued study will tell.

But, in the meantime, keep an eye out for the big one…the leatherback!

Bob is the owner of Stepping Stone Ecotours and a naturalist for a dolphin survey team on the Dolphin Explorer. He is a member of Florida SEE (Society for Ethical Ecotourism). Bob loves his wife very much!