A Great Day for Bocce! 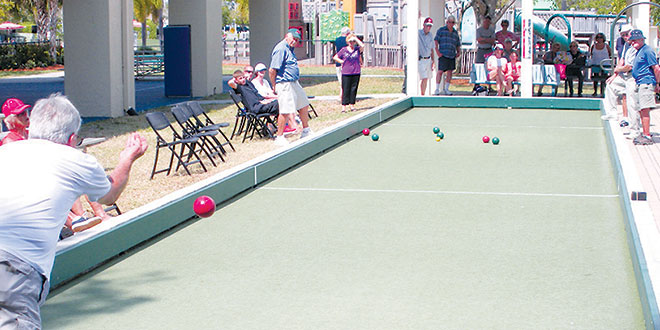 A player attempts to score during the Bob Ray Memorial Bocce Tournament.

The thrill of victory had Jim Guilford and his teammates beaming at the conclusion of the Bob Ray Memorial Bocce Tournament.

He, along with Peter Pereene, Joe Deo and Jerry Leeman captured the championship, outpointing 15 other four-person teams in the single-elimination contest held Feb. 28 at Mackle Park.

They also captured the crown and the trophy that goes with it, in 2013.

How did it feel to win again? “Wonderful, wonderful,” said Guilford. “This is the highlight of the year.”

The annual tourney is sponsored by the Marco Island Italian-American Society and the city’s Department of Parks and Recreation.

It was standing room only as the tournament unfolded under partly cloudy skies, without the slightest hint of rain.

Ricardo Parducci focuses on the action, as his wife Giovanna, left looks on.

The tournament and the championship trophy are dedicated to the memory of her late husband Bob.

“The people are wonderful, Ray added. “They help referee the rounds. It’s just a good, good group of people.”

Cheers, applause and encouragement were heard frequently from the crowd during the course of the day. Fausto D’Andrea brought along a laser measurer that he and a friend jerry-rigged to use for accurate measurements.

As the championship and runner-up matches were taking place, Julia Omahen sat contentedly watching her husband Joe and his teammates play.

“I was in the tournament, but we lost by two points,” she said with a chuckle. “But it’s still fun.”

Peter Pereene said he hopes more bocce courts can be added at the recreation center so that the tournament can expand to include everyone interested in playing.