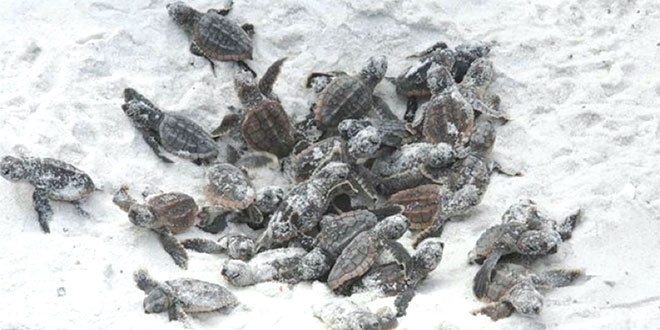 Sea Turtle nesting season is coming to a close on Florida’s beaches, and according to the research scientists with the Florida Fish and Wildlife Conservation Commission, loggerhead turtle nest numbers remained high and leatherback turtle nesting reached a new state record.

“Sea turtles face many important threats at sea and on land, which need to be addressed for the recovery of these charismatic and endangered species, but the results of the 2014 nesting season in Florida are encouraging and provide a positive outlook for the future,” said Dr. Simona Ceriani, FWC research scientist.

Throughout Collier County, the number of nests and hatched nests generally were higher than last year. On Marco Island, though, just 73 nests were found, down from 93 in 2013, and of those nests, only 55 hatched. On the bright side, there were only 107 false crawls down from 166 last year.

Experts believe the overall number of nests in Florida has increased over the past several years as a result of increased conservation efforts and decreased detrimental storms throughout the state.

A number of agencies — both state and local — conduct monitoring programs. The state program is a collaboration involving more than 2,000 individuals with diverse backgrounds who share a common passion for sea turtles. The extensive data collection from more than 800 miles of shoreline with 199 nesting beaches is made possible with the help of FWC-trained and authorized surveyors from conservation organizations; universities; federal, state and local governments; and hundreds of private citizens.

The FWC and partners perform two annual surveys: a statewide survey that began in 1979, which documents nearly all sea turtle nesting in Florida, and an index survey, which pools data from select beaches that have consistent monitoring during a specific 109-day window to detect trends in nesting.

Part of this effort is aided by researchers at Florida’s three National Estuarine Research Reserves (NERRs), located in Naples, Apalachicola and Ponte Vedra Beach, gather evidence to track sea turtle populations and document the success of the nests.

“We are very pleased to see the sea turtle population increased this year within our managed areas,” Kevin Claridge, director of DEP’s Florida Coastal Office. “There are many variables that can affect population numbers, but a key component to species management is good data, which in this case would not have been 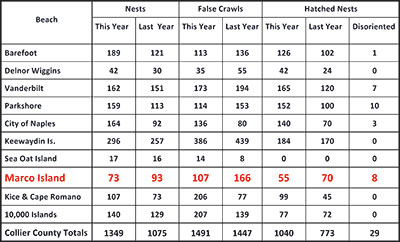 possible without so many excellent partnerships and volunteer hours.”

In addition to more total nests, Rookery Bay Reserve also had more hatched nests this year, totaling 360 this season, compared to just 287 last year. The increase in hatched nests reflects the improvement of statewide nesting productivity. Additionally, Cape Romano, within Rookery Bay Reserve, is reporting the highest number of sea turtle nests since 2006. An estimated 6,000 hatchlings from those nests have made it to the Gulf – more than double last year’s reported 2,500 and soaring above the count of 678 in 2012.

Green turtle nesting trends show an exponential increase over the last 26 years, although counts in 2014 were much lower than last year. This was expected because green turtle nesting patterns tend to follow a two-year cycle with wide year-to-year fluctuations. Green turtle nest counts set two consecutive high records in 2011 and 2013.

Although nesting at a much lower level than loggerheads, the nest counts for leatherback turtles reached a new record high in the state in 2014, showing a slight increase over the previous high in 2009. The trend in leatherback nesting shows an exponential increase over the last 26 years.

Sea turtles spend the vast majority of their lives in the open ocean, only coming inland to nest. Florida is a vital area for sea turtle nesting, with nesting areas running along both the Gulf and Atlantic coasts. The nesting season spans from early May until the end of October.

During sea turtle nesting season, those visiting beaches are asked to keep lights off at night, avoid any interaction with nesting turtles and avoid all marked sea-turtle nests. When beachgoers leave lights on at night, sea turtle hatchlings may become disoriented and head toward those lights, instead of the moonlight over the ocean.

Simple actions beachgoers can take to ensure they are not hindering hatchlings from successfully making it to the water are listed below.