A Figurative Jaunt to Italy, North to South 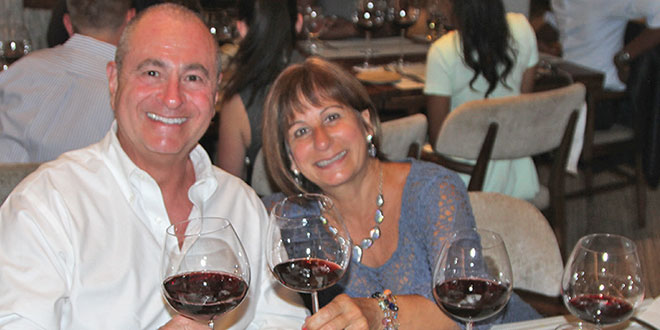 The journey’s purpose: a spring “tour” of Italy via the palate, the taste buds and the tummy.

It was an assignment that about 20 diners gladly accepted. They sat down to a sumptuous, four-course meal, expertly prepared by chef Tsvetan Vladimirov, that was a gustatory representation of the Amalfi Coast, Tuscany, Sicily and other regions of Italia. Each course was accompanied by an appropriate fine wine produced in that country. 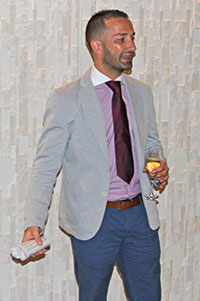 manager for Florida, kicked off the tour by presenting the assembled with a brief history of wine making in Italy.

They learned that wine making began 4,000 years before Christ, practiced by the Mesopotamians in what is now Iran, and by the Egyptians. It was the Greeks and Etruscans who bought the art to the Italian peninsula, where it was adopted with gusto by the Romans.

Turiello also preceded each course with a description of the wine that was being served. 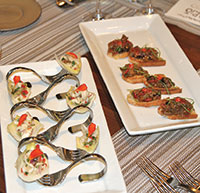 The Sicilian caponata, with roasted garlic, toasted fiselle and olive oil, left,and Prosciutto dates, with Castelmagno blue cheese were among the appetizersserved at the wine dinner.

familiar with them and know what to order.”

The wine was a Ferrari Brut 2016 from the region of Trentino-Alto, which is made like champagne, but retains its bubbles longer. Turiello said the vintage won this year’s Champagne & Sparkling Wine World Championships, besting Dom Perignon and other notables. 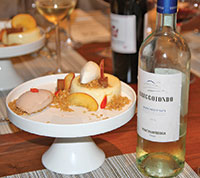 The ricotta cheesecake with hazelnut, local peaches, sea salt and saba, was accompanied by a Moscato D’asti from Italy’s Piedmont region.

a Primitivo 2012 from Italy’s Puglia region.

Lastly, there was 60-Day Dry Aged Tagliata, with pearl onion agrodolce and cedar-roasted local mushrooms, accompanied by Noto Nero D’Avola, from the vines of Sicily.

Dessert consisted of ricotta cheesecake with hazelnut, local peaches, sea salt and saba, washed down with a Moscato D’asti from Italy’s Piedmont region.

After the last sip had pursued the final delicious morsel to their final destination, the tour was at its end, but the memories, ahh the memories, they shall remain.