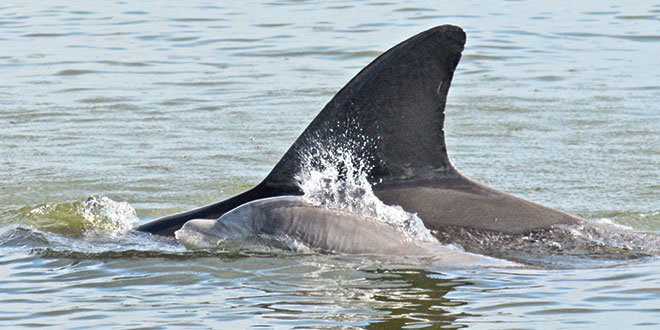 Everybody loves dolphins. Most people taking nature trips in South Florida want to see one of two things…dolphins or alligators. We’ll forget about the ‘gators today and talk about the other favorite in our area for a mid-year update.

On board the Dolphin Explorer you not only get to see dolphins, but you have a chance to watch a team of citizen scientists document the activity of these mammals for research purposes. Each one has a name and their daily behavior is recorded in a database. With more than 10 years of research established, the team gets to know quite a bit about the local population.

Last fall nine new calves were located and all but one seems to be doing well. Many of these mothers are experienced with the birthing process, and several have produced newborn every three to four years. At least one female had its very first calf.

I mentioned above that all but one seem to be doing well. Unfortunately I experienced my very first dolphin-grieving period. On February 20th an adult female, mom of a new calf, was seen pushing her lifeless young one along the surface of the water. There were no obvious signs of trauma: no exterior wounds or indications of bite marks or propeller scarring. The adult female, Tess, was seen several times over the next few days and continued to push the tiny body toward the gulf.

Just like some other animals, it is thought that the adult female dolphins may experience this grieving behavior for several days after the loss of a young one.

On a brighter note it is quite an experience to watch several of these now 8-to 9-month-old calves come together with their respective mothers for a social gathering, a little “play date” if you will. Since the dolphins here do not migrate this type of

Photo by Bob McConvilleGiza had a calf of her own last fall, making her a mom and a grandmom in the same year!

social activity could be important to determine which ones will formulate potential bonds in the future.

With so many years of data regarding our population we were able to identify our first known grandmother last fall. Giza, one of our most productive females, gave birth to Sintas in 2006. Sintas had her first calf, J. Fireball, last year. This would be Giza’s grandbaby. By the way, Giza had a newborn of her own about the same time, making her a mom and a grandmom in the same year!

So…what’s the outlook for this coming birthing season? To me, it looks pretty good. There are at least eight females that have calves turning 3 or 4 years old this fall. Since the young stop nursing at age two or earlier, these adult females would be prime candidates to give birth again this year.

In all, I have at least 11 females that could become new mothers this year on my radar. On the top of my list are Nibbles, Halfway, Rangle, Sparky and Sparkle.

Want to know more about them? Come join us on a trip! We would enjoy sharing our findings with you!

Bob is a Naturalist on board the dolphin survey boat, the Dolphin Explorer. He is also a member of Florida SEE (Society for Ethical Ecotourism). Bob loves his wife very much!