A Concert of Harps 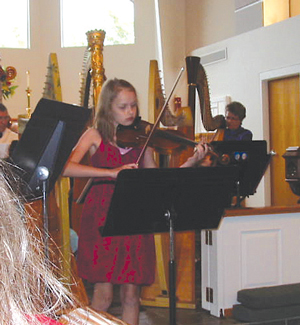 On Sunday, January 20, Marco Island music lovers heard a joyful noise at St. Mark’s Episcopal Church. As part of St. Mark’s 2012-2013 Concert Series, the Naples Harp Ensemble presented a lyrical musical afternoon. Our own Carolyn Katchmar of Marco Island is a member of the ensemble.

The program commenced with Bamboula by Louis Moreau Gottschalk. The vivid music was enhanced by the superb talent of the full ensemble with the Kellyn Celtic Dancers interpreting the animated melody dramatically veiled in black. The Stewart Family Violins comprising mother, son and daughter played Tango by McLean with clarity and vitality.

The music of composers Leroy Anderson and Saint Saens were part of the opening program followed by the Youth Ensemble performing Stravinsky and Friml. The young performers described their love of the harp and impressed the audience with their talent and 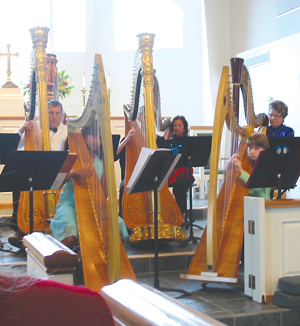 precision. The Youth Ensemble is directed by Laura Lou Roth who has been with the

for a number of years.

The first part of the program concluded with the full ensemble playing Off She Goes and Syncopated Clock, another composition by Leroy Anderson. The second half of the program included the works of Rimsky-Korsakov and Erickson featuring the Kraichy/EricksonDuo.

Twelve year old soprano, Zofia M. brought the audience to its feet with her amazing performance of Schubert’s Ave Maria and a sensitive rendition of I Dreamed A Dream from Les Miserables. The afternoon concluded with Tchaikovsky’s 1812 Overture. Generous donations from the delighted audience benefitted the Naples Harp Ensemble Scholarship Fund.

The next concert offered by St. Mark’s Church will be on Sunday, February 10 at 4 PM. The event is titled Epiphany Concert: Festival Evensong and will include St. Mark’s Choir, Soloists and Chamber Orchestra.