A Cocktail and Culinary Crawl through the Marriott 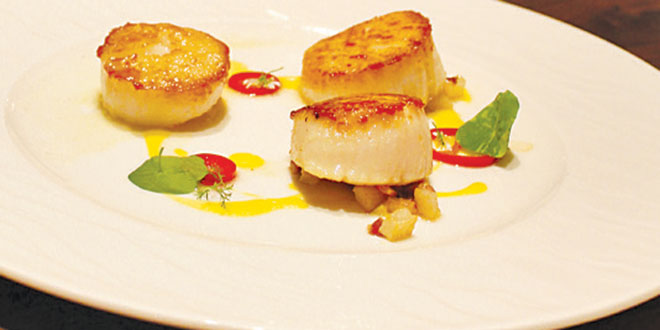 The scallops served at Ario. Also served with this course was the beef tartare and foie gras.

The Marco Island Marriott Beach Resort, Golf Club and Spa will be undergoing some major changes come 2017. The hotel, which has long been a staple on Marco Island, is transitioning into a JW-branded-property. Upon its completion, it will be the JW Marriott brand’s first oceanfront resort in the United States.

Though the resort isn’t complete just yet, many changes have already been made specifically in the way of the cuisine. Earlier this month the Marriott Beach Resort, Golf Club and Spa invited the Coastal Breeze News on a Culinary and Cocktail Crawl to showcase their new restaurants as well as their updated older restaurants.

The tour kicked off in the lobby where the group was served blackberry lemonade, made with fresh blackberries and blackberry vodka. Drinks in hand, we made our way down to Quinn’s on the Beach, one of the resort’s older restaurants and Marco’s only beachfront eatery. Sous Chef Matthew Blair introduced the meal. We had coconut shrimp with mango relish and scotch bonnet 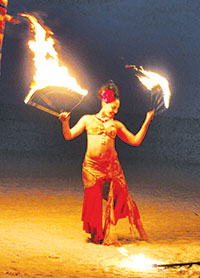 “We’re lucky here. We have a lot of great influences with our staff, Haitian, Cuban, Mexican and actually Thai believe it or not,” said Sous Chef Matthew. “Everybody brings something different to the table and we try and use that when we make our menu.”

The next stop was Kane, a new restaurant that the hotel will offer sometime in the near future. The staff created a sneak peak set up right on the beach, lined with tiki torches, palm trees and a fire pit. As the sun went down we ate chicken yakitori and pork belly bao, which is sort of like an Asian taco filled with pork belly, cilantro, radish and a spicy peanut sauce. We drank a cocktail cleverly named “Lights Out,” a reference to turtle season. It was served in a coconut with Meyers Rum, 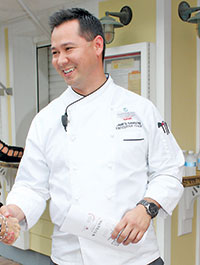 Cruzan Rum, Captain Morgan, Malibu, with orange and pineapple juice. Très tropical. Before we left to our next location one of the resort’s fire dancers performed a hypnotic number.

While the first two stops were without a doubt amazing, they were only the appetizers for what was to come. We said goodbye to Kane and made our way inside to Ario, formerly Kurrents. Ario opened in October and offers guests an international wine list, in house artisanal dry-aged steaks, and of course local Gulf of Mexico seafood. We enjoyed a three-course meal with different wine pairings and champagne for each dish.

Director of food and beverage Charles Albanos introduced us to the restaurant and explained Ario’s global nomad concept. Ario looks to combine simple ingredients with intriguing flavor profiles in order create a unique dinning experience for guests. First we were served scallops, foie gras and beef tartare. Followed by arugula, gem lettuce, black cod and grouper. While all the dishes were delicious, the star of the evening was 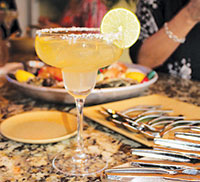 without a doubt the dry aged steak. Chef de Cuisine, Gerald Sombright presented it to us before cutting it and serving it.

After dinner, Chef Sombright gave us a quick tour of the immaculate kitchen and the room where the dry aging takes place. It’s this cold space with rows of meat and a wall lined with Himalayan pink salt.

Finally, we ended our evening back where we started. We entered the lobby and made our way to Korals where we had one last cocktail and some bacon flavored sweets paired with it.

I found each restaurant, though undoubtedly different, was as good as the next. It just depends on what you’re looking for, really. If you want fine dinning with paired wine Ario is the place to go. If you were looking for something a little more laid back but with a great view Quinn’s or Kane would be perfect and if you just want a drink to end the evening, Korals is located conveniently in the lobby.