A Chef to Savor 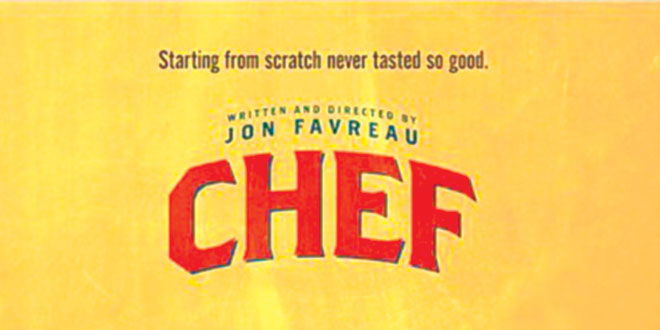 If you’ve had your fill of super-heroes, super-villains, zombies, Godzilla’s and other zillas plus assorted other freaks, treat yourself to “Chef.” It’s a delightful take on the food world, family bonding and multiculturalism with a great soundtrack and a bit of a travelogue to boot.

After a disastrous experience with “Cowboys and Aliens” and a few other non-memorable movies, Jon Favreau wrote, directed and stars in this charming and very funny piece of entertainment. Carl Casper (Favreau) is a first-rate chef in a successful Los Angeles restaurant. The problem is that he’s still turning out a menu that, while attracting diners, is behind the times. He’s bored, frustrated, divorced and unhappy with the restaurant. Too bad. The owner, (Dustin Hoffman) in a semi-cameo role, enjoys the profits and doesn’t want to change. A disastrous review by noted critic Ramsey Michel (the always excellent Oliver Platt) sends Carl into a downward spiral. He gets just enough information about twittering from his 10-year-old son, Percy (Emjay Anthony), to send out a rebuttal on the Internet and it goes viral. 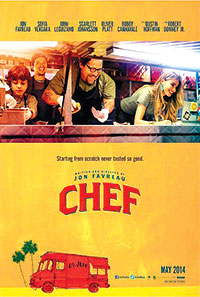 Carl’s ex-wife, Inez (Sofia Vergara), maneuvers Carl into heading east to Miami with his son, and he’s persuaded to try a food truck, courtesy of Inez’s first husband (Robert Downey, Jr.). The food truck is a mess, but it gives Carl the opportunity to bond with his adorable son (suspend your disbelief at this point). Carl’s former grill cook (John Leguizamo) likes and respects Carl so much that he joins him in Miami. It’s a lucky thing because Carl speaks no Spanish and understands less. Father, son and sidekick fix and spruce up the truck into a Cuban masterpiece in some very funny scenes.

From Miami, the three set out to return to Miami via Texas and New Orleans. The three amigos make a huge success of the food truck thanks in large part to the kid’s mastering of the Internet.

Yes, there’s a lot of fluff and feel good in this movie. It works well because the result is pure, unadulterated fun.

Footnote: Jon Favreau actually took six weeks of training with a world-class chef in preparation for the movie, and some of the cooking scenes apparently show his new skills.