A Celebration of Success 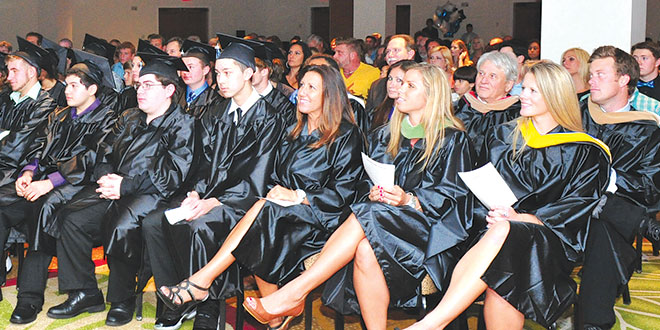 Faculty, staff and members of the class of 2014 prepare for the MIA’s first-ever graduation ceremony, which was held at the Marco Island Marriott Beach Resort.

Family, faculty, staff and school board members joined together Friday, May 30, to salute and celebrate the first-ever graduating class of the Marco Island Academy. The ceremony was held in the Capri Ballroom at the Marco Island Marriott Beach Resort.

The ceremony marked the end of a week filled with nervous excitement and anxious anticipation for the 20 students who made up MIA’s class of 2014. On Thursday, May 29, MIA staff held a Senior Breakfast to honor the graduates and to recognize their academic achievements.

Myra Ortega was named the class valedictorian and Jacob Hurtley the salutatorian. The two outstanding students also received a number of additional accolades. Ortega was awarded a number of scholarships, including the Andrew Hunter Homes Role Model Scholarship, a Gene and Mary Sarazen Foundation Scholarship and a Marco Island Noontime Rotary Club Scholarship. She also was recognized for outstanding achievements from the Science Department at MIA. Hurtley was named a State of Florida Scholar and received Merit Diploma designation.

AnnMarie Grossi also was recognized for her exceptional academic achievements, having received a scholarships through the Bright Futures

In addition to her scholarship from the Kiwanis Club of Marco Island, Taylor Matheny was the recipient of the Manta Ray Service Award. Alexa Campisi received the Manta Ray Leadership Award, and Kiera Ludwigsen was presented the Manta Ray Spirit Award.

After the speeches and diplomas were handed out, MIA’s class of 2014 converged on the beach to fulfill the tried and true celebratory graduation tradition of tossing their caps into the air. The sun was setting in the western sky as caps and tassels flew into the air quickly followed by the excited sounds of expectation and relief, allowing MIA’s first graduating class to say one final farewell.