A Celebration of Achievements 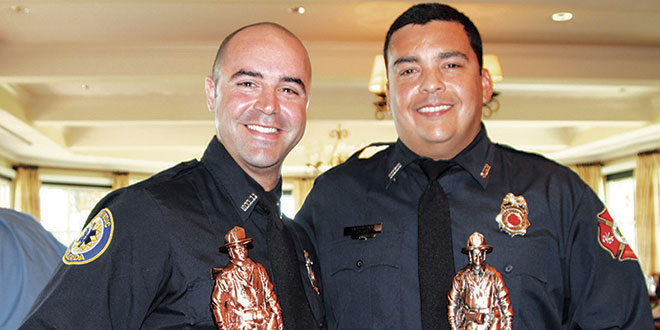 This year’s Marco Island Fire Rescue Foundation’s Annual Luncheon and general meeting took place at the Island Country Club. Above all else, it was a “Celebration of Achievements.”

Fire Rescue Foundation President Dianna Dohm led the luncheon program, which began with board member Mike Stapleton leading the packed house in the Pledge of Allegiance. Pastor Kyle Bennet gave a moving invocation, telling those in attendance that they were “breaking bread with heroes.” The program to follow served to illustrate just how true his statement was.

The first order of business was to swear in the Fire Rescue Foundation’s 2016 officers, including Dianna as president, Barb Murphy as vice-president, Cheryl Ferrara as secretary, and Roy Birkeland as treasurer. Marco Island City Council Chair Bob Brown had the honors of swearing the slate into office.

Barb reviewed the many activities and achievements of the Fire 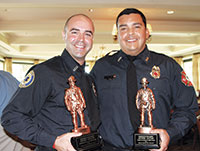 Rescue Foundation in 2015. It was the 50th anniversary of the Marco Island Fire Rescue Department. The Foundation celebrated this golden milestone with a 50th Anniversary Commemorative Book, and hosted a very fitting Fireman’s Ball. “The ball was a deserving tribute to our firefighters and their guests,” Barb continued.

One of the Foundation’s great accomplishments in 2015 was the realization of a scholarship program, which was a vision of board member Monte Lazarus, who passed away last year. The program has been officially named the Monte Lazarus Marco Island Fire Rescue Foundation Scholarship Fund in his honor. Scholarships awarded for 2015 were funded by proceeds from the Foundation’s annual cruise raffle. Four $1,000 scholarships were granted to deserving family members of Marco Island firefighters and paramedics.

The Fire Rescue Foundation also held its annual 9-11 Memorial Tribute to honor the fallen first responders. This event was

spearheaded by Jim Curran, committee chairperson. The Fire Rescue Foundation will continue to support the life-saving CPR program, and has also added a new SMART 911 program chaired by board member Toni Macchiarolo. You can read more about SMART 911 on page A28. Organizers and participants of the annual Chili Cook-off and pancake breakfasts were also acknowledged. In closing, Barb thanked everyone for allowing the Foundation “to serve those who serve us.”

Chief Murphy announced awards for a few members of the Hideaway Beach Country Club. “We received a call that an individual had had a heart attack and was in cardiac arrest. One of the most critical issues in the saving of lives on Marco Island, or anywhere in the United States is quick intercession with CPR or an AED, and people taking the time to get involved,” said the chief. 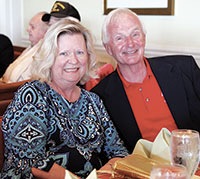 Sandy and Jim Johnson at the Fire Foundation’s annual luncheon.

Don Camplese who collapsed on the club’s dance floor, was present in his stead. She thanked the courageous men and women who rushed to her husband’s side when he fell over. She said, “We all know some people react and some people act. Those that act are heroes. Although his chair at the table is empty here, his chair at home is not.”

Chief Murphy thanked those that helped him and thanked the two Hideaway Beach employees who rushed to retrieve the AED and begin the procedure.

A longstanding tradition followed. “The next presentation is the pinning tradition. When a firefighter comes through our doors, their family is forever a part of us,” said Chief Murphy regarding the pinning ceremony. The pinning of the badge ceremony is for those that were promoted or recently hired:

Tom has served the City of Marco Island Fire

Speaking at the podium during the pinning ceremony is Fire Chief Murphy, as Division Chief Tom Bogan shakes Firefighter Paramedic Grady Harrison’s hand, while he holds daughter Harper in his arms. Looking on, from left, are Tom Bogan, Sr. and Captain Scott Cory.

Rescue Department for 24 years, and has progressively risen through the ranks. On August 17, 2015 he was promoted to division chief, serving as shift commander of B-shift.

Additionally, Tom has dedicated himself throughout his career to the department’s marine fire and rescue program, and is responsible for its tremendous success. Because of his many accomplishments he received the 2014 Naples Chamber of Commerce Distinguished Service Award and the 2008 Firefighter of the Year Award.

He was pinned by his father, Tom Bogan, Sr.

Scott Cory began his career as a volunteer with the Marco Island Fire Rescue Department in the early 1990s, showing such potential that the department sponsored him to attend the State Fire Academy and EMT school. Scott was hired by the Golden Gate Fire Department where he served successfully for many years. He then went on to work for Collier County

Speaking at the podium during the pinning ceremony is Fire Chief Murphy, as Division Chief Tom Bogan shakes Firefighter Paramedic Grady Harrison’s hand, while he holds daughter Harper in his arms. Looking on, from left, are Tom Bogan, Sr. and Captain Scott Cory.

Grady began his employment with Marco Island Fire Rescue on September 19, 2015, after nine years with Collier County EMS, of which several of these years he worked on Marco Island in our cooperative exchange program. Grady is an EMT/paramedic instructor with Florida Southwestern State College and a tactical paramedic.

He was pinned by wife, Allie and daughter Harper. 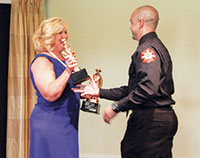 Juan began his employment with the Fire Rescue department only two days earlier, on February 24, 2016, after nine years with Collier County EMS, of which several of those years he worked on Marco Island in our cooperative exchange program. Juan previously served as a field training officer, mentoring new paramedics toward achieving credentialing by the medical director. He received badge number 102.

He was pinned by fiancé Michelle and children Mikala and Gage.

Firefighters of the Year 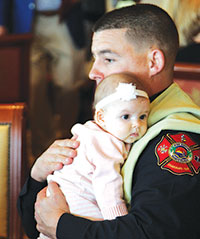 as she knew he was a paramedic. The lady explained her husband wasn’t breathing. Sergio asked his wife Christie, a nurse, to get Munier, and Sergio followed the lady to the patient, who was not breathing and blue in color. Sergio quickly made an assessment and relayed information to the 911 operator. Sergio began to move the patient to the floor as Munier arrived and together, they moved him to the floor to enable CPR. Sergio, Munier and Christie began CPR. The patient regained consciousness, only to lose it again. CPR continued using equipment Sergio luckily still had in his car from a class he taught the previous morning. They stayed with the patient until EMS arrived.

At the scene, one of the North Naples EMS crew said, “I don’t know who those construction guys were, but they sure knew a lot about medical treatment!”

Thankfully the patient, Munier’s neighbor, made a full recovery. Sergio and Munier along with their families were later invited to the neighbor’s home for a barbecue in their honor. President Dianna Dohm was proud to honor Sergio and Munier with Firefighter of the Year Awards.

Upon accepting his reward, Sergio thanked the Fire Rescue Foundation, “We are honored, but we were more honored that we were able to save his life that day. It made me realize the importance of CPR. Early compressions were a factor in his full recovery.”

Munier told attendees that it is a great feeling to work with such an outstanding crew. After thanking his wife and children for supporting him, Munier modestly said that it was

Chief Mike Murphy thanked the Hideaway Beach members and employeeswho came to the aid of Don Camplese, who suffered a serious heart attack at the club.Luckily, at the time there were two doctors present, and a group of fast-acting heroes. Don survived, and his wife Kay expressed her gratitude at the event. PHOTO BY VAL SIMON

hard to accept the prestigious award, because “we all perform the same tasks. We all know what we signed up for. It is about serving the people of the community.”

The two received a standing ovation.

The Marco Island community has been concerned about recent reports on a possible fire district consolidation. Chief Murphy was asked to take the time to explain the critical issues of what is actually going on in Collier County regarding EMS services. This was an opportunity to enlighten the members and other guests on a complex issue. Further explanation on the EMS topic is in a continuing article, which can be found on page A6 of this edition.

The entire luncheon, filmed by Williams Hughes Productions and sponsored by Coastal Breeze News, is available for viewing at vimeo.com/157153907.

For more information on how you can support the Marco Island Fire Foundation, or to purchase a 50th Anniversary Commemorative Book or 2016 Cruise Raffle tickets, go to www.marcofirefoundation.com.