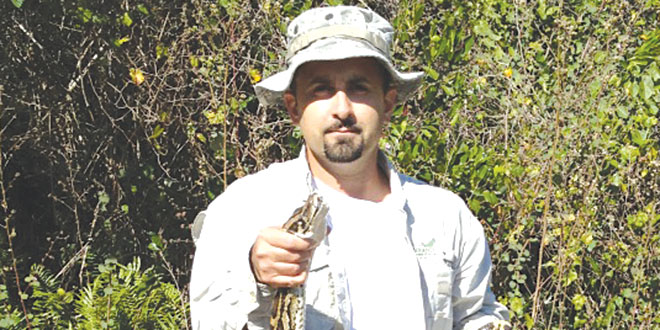 In the last edition of Coastal Breeze News, I gave you a brief introduction to Burmese pythons. These animals are an invasive species (not native to Florida), and they are now firmly established not only in the Everglades but as far west as Collier County. Their numbers have been estimated to be from 15,000 to 150,000 or more throughout the lower portion of the state. They inhabit areas that are both tropical and subtropical, much like that in our region.

I recently had a very enlightening conversation with a man who studies Burmese pythons. He is out in the brush, especially this time of year, on a regular basis to not only study their habits but to provide both education and awareness of many invasive animals.

Ian Bartoszek is a biologist at the Conservancy of Southwest Florida. He is also the invasive animal species lead for the Cooperative Invasive Species Management Area (CISMA) of Southwest Florida. CISMA does outstanding work addressing invasive species management in geographic regions throughout the state, and is proud to bring both public and private entities together for this purpose.

When I first met Ian at the northwest corner of the Picayune Strand, he was giving an informative talk to an anxious audience. He had a six-foot Burmese python draped over his shoulders. I’ve had several conversations with him recently, and he agreed to answer a few questions for our readers. This interview is a series of excerpts from a recent talk.

BOB: Ian, is this python study strictly for the Conservancy?
IAN: The study of invasive species is a collaborative radio telemetry study in Collier County — a research effort that includes the Conservancy of Southwest Florida, Denison University, Rookery Bay NERR and the US Geological Survey.

BOB: Would you say that Burmese pythons are just an invasive species passing through our area?
IAN: No, they are firmly established in the county with the core area being south of US 41.

BOB: Does this mean their preference is a mangrove habitat?
IAN: Saltwater does not seem to have an adverse affect on them, but they prefer freshwater environments where the water is shallow or conditions are marshy. They like a heavily vegetated area to provide more cover.

BOB: You mentioned that you’ve had a very busy couple of months. What’s going on?
IAN: Radio tracking of Burmese pythons has been going on for over a year. Tagged males are tracked and can often lead to the live capture of several females or even lead to a nesting area. We’re coming up on breeding season so this tracking is very important right now. Females are tagged as well and often lead to other individuals during the breeding season.

BOB: You mention “live capture.” Are any of these animals destroyed on sight?
IAN: No, all specimen are captured and taken to a veterinary office to be euthanized and then studied to learn what they consume, the reproductive capacity and their growth rates.

BOB: The surviving females…how many eggs can be found in a typical nest?
IAN: Our count has been 25-35 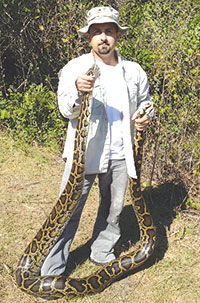 eggs. However, some larger females have produced as many as 80 eggs.

BOB: I am aware that some decent sized animals have been found in the stomachs of these pythons. Would you consider them a threat to humans?
IAN: Just the opposite. They are timid and don’t want to be bothered. However, if cornered, they will defend themselves. It is always good to be cautious with any wild creature.

BOB: There seems to be more sightings in recent years. Do you think their numbers are growing in Collier County?
IAN: With the attention placed on this species, more people are actively looking for them. That could be part of it. More independent road kills are being noted, and they could be extending their range. Even though Burmese pythons are the only large invasive constrictor known to breed in southwest Florida, many other species of non-native snakes and reptiles are often found here as escaped pets or intentional releases.

Many, many thanks to Ian Bartoszek, a biologist who places education and awareness on an equal par with productive research. This a major stepping stone for public knowledge.

Let’s take just a few minutes more to elaborate. Burmese pythons are the only python species found in our area at this time. The African Rock python has a foothold in an area on the East coast but doesn’t seem to be heading our way…yet.

Burmese pythons are an apex predator. They will pretty much devour anything they can from herons and egrets to marsh rabbits, possum, raccoons and deer. Even other snakes and alligators are not safe from them. In one instance, an adult female was found with a 79-pound deer in its stomach. Being extremely flexible, the girth on this big girl measured at 46 inches. Once the deer carcass was removed, this python still weighed 136 pounds!

They can grasp their prey with backward-facing teeth to grab them, and then finish the job by coiling around them and constricting. To take in large prey, they utilize lots of hinge joints. They also have a quadrate bone that links the upper jaw to the lower jaw that allows the mouth to open extremely wide. They do not have a “chin bone” like we do but a separate bone on each side of the jaw. With very flexible skin underneath, they can spread these jaw bones and consume prey 5- to 6-times their own size!Amazing!

The introduction of this species to our area is yet another obstacle that upsets the natural order of South Florida’s ecological communities. As much as we try to protect and preserve our beautiful area, another adjustment must be made.

If you see a Burmese python, you are welcome to report this sighting by calling 1-888-IVE-GOT1. Bartoszek also welcomes your calls at 239-403-4208, or email him at ianb@conservancy.org with questions or sightings.