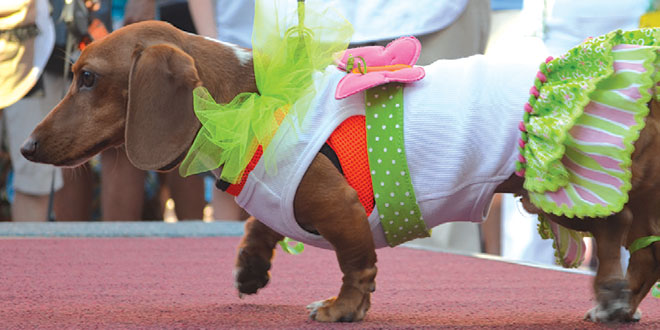 Oscar hits the stage in the Puppy Parade. PHOTOS BY JULIA BARNETT

Mutts and Martini’s returned to Marco for the sixth year, running this past Wednesday, March 19, 2014. The event once again brought barks and bucks to the Esplanade Plaza, all in the name of charity. The “Yappy Hour” event ran from 5 to 7:30 p.m. and included a puppy parade, a silent auction, and a 50/50 raffle.

Mutts and Martini’s is an annual fundraising event held to benefit Bedtime Bundles, a local charitable organization that provides necessities to migrant workers and their families, especially children, living in Collier County. Founded in 2006 by Karen Saeks, Bedtime Bundles began as a project inspired by children and run out of a bedroom. When Karen was a volunteer at Manatee Middle School she got involved with the migrant education 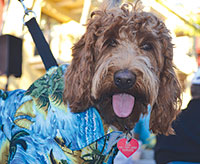 Red, a labra doodle, won the prize for being the dog to look most like his owner,Jerry. They were dressed in matching Hawaiian shirts.

advisor in an effort to assist the children who did not have the basic necessities, and Bedtime Bundles was born from there. The charity grew too big for the bedroom and soon moved into the garage, followed by a relocation to St. Marks Episcopal Church. After that, an anonymous donor gave Bedtime Bundles the office space they currently occupy in Sunset Plaza by Cocomo’s.

Last year, the Mutts and Martini’s event raised over $28,000 for Bedtime Bundles, and with better (meaning less windy) weather this year, the event brought more people, and the amount of children and families Bedtime Bundles will be able to help will be even larger.

This year’s Mutts and Martini’s was once again emceed by Steve Reynolds, of Island Paradise DJ. A professional DJ for 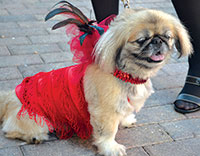 Yolanda Medwid and her pooch, Brady, dressed as a couple of flappers from the Roaring 20s

“CJ’s is always proud to contribute to our local community and to such a worthwhile organization,” CJ’s Chef Laura Owen said. Owner Jacquie Coon added that they were “honored to host and support this event and organization for the past six years.”

The fundraiser included a 50/50 raffle that ran until 7:30 p.m. The event also hosted a silent auction, the 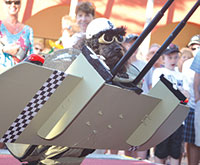 Marcel’s owners, Jerry and Sharon Rutkowski, discovered his talent when he would follow Sharon to the piano bench and begin playing.

proceeds of which went directly to Bedtime Bundles. The auction items were varied and seemingly endless. Items ranged from artwork created by local artists, gift baskets, locally made pottery, jewelry, a propane gas fire pit from Lowe’s, a stay at the Marco Marriott, and gift cards for places such as Critter Café, Carrabba’s, Stan’s on Goodland, as well as excursions like free rounds of golf and a trip on the Key West Express. The auction also included tickets to see the Miami Heat, the Boston Red Sox and the Chicago Cubs – the big favorite of last year’s auction and this year’s.

The highlight of the Mutts and Martini’s event, however, was the Pooch Parade. Attendees of the event walked their four-legged family members across the stage for 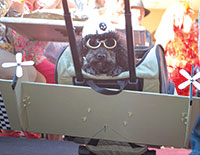 Marcel, a toy poodle who can play the piano, was in costume as a “barnstormer” pilot.

the judges, and winners are then chosen. There were six categories for winners this year: the dog that looks most like its owner, best party animal, best large dog, best small dog, best owner/dog costume combo, and the all-around best in show. An event award was given out to the people’s choice, chosen from the winners by the spectators. The prizes for all of the winners were provided by Critter Café.

With this year’s Mutts and Martini’s event a great success, next year’s should prove to be bigger and better. The date has already been set for Wednesday, March 18, 2015, in the Esplanade Plaza, right in front of the outside gazebo bar of CJ’s on the Bay.

To learn more about Bedtime Bundles, the work it does, or to lend your support, visit www.bedtimebundles.org or call 239.393.3415