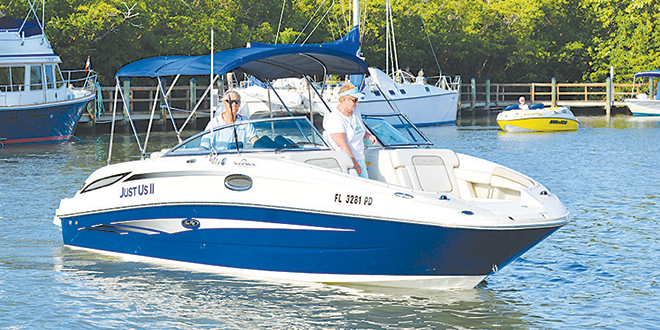 Just Us II with Peggy and Ted.

Marco Island Sail and Power Squadron held their Digital Scavenger Hunt on Saturday, March 14th. There were twentythree who participated in the Scavenger Hunt! At 9:30am Fire Chief Mike Murphy and his wife Barbara arrived at the Calusa Marina dock in Goodland via jet skis to deliver the “hunt list” to Co-Captains Rhonda McAuliffe-Gloodt and Carol Einhart, who hosted this year’s hunt. The Digital Scavenger Hunt was originated by Past Commander Tippy Cavanagh and John Cavanagh in 2007 as a fun on-the-water squadron activity. The weather was perfect as the fleet picked up their “hunt list” and each crew was off for the search to find their targets for digital capture. Most targets this year were given Latitude/Longitute coordinates; with a few like
“a dolphin in a boat wake” or “red wave runner” found anywhere. Camera SD cards were to be turned in before 4:00pm for the event. Chairs needed to confirm each participant’s pictures; large posters of the targets by Mike were available at the turn-in point. The celebration party was at 6 pm, held at the marina screen room with
pizza, salad, and homemade brownies by Mary Alice Wilson were enjoyed. The following results were announced: 3rd place – (new member boat!) Catnip with Ann & Peter Derwin, Kathleen Douglas, Anne & Sabrina Colpaert, Danielle, Jeff & Daniel Pollitt; 2nd place – Green Flash with Pam & Roy
Sander and Mary Alice & Chuck Wilson; 1st Place – Just Us II with Commander Peggy Reiss and Past Commander Ted Reiss, Past Commander Andrea Battaglia and new members Mary & Mike Dickens. Everyone had a fantastic time and will look forward to the digital scavenger hunt next year to be hosted by the winning team!