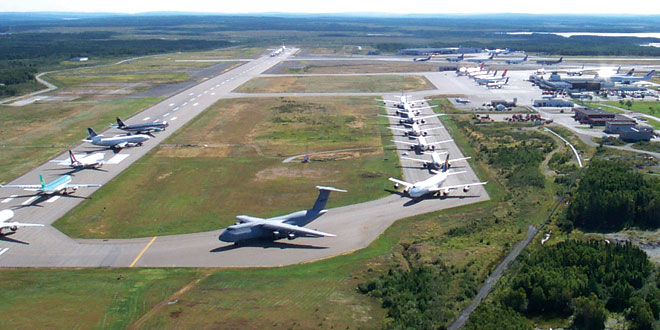 It was a one-hour car ride to the seven-hour journey across the Trans-Canada Highway to reach the eight-hour ferry ride from Newfoundland to the mainland of Canada, where another six hours of driving brought Myrtle and Harold Pelley to the airport. The Pelleys flew to Fort Myers where they were picked up by their friends Frank and Elise Delaney, who then brought them to Marco Island. The trip, nearly 12 years in the making, was in some way, a thank you gift from the Delaneys as the Pelleys were their saving grace during the 9/11 tragedy of 2001.

Making their way home to New York from Dublin, Ireland on that tragic day were Frank and Elise Delaney. It was a full flight that Tuesday, a 747 headed to Newark, New Jersey. “The pilot came over the speaker and said that he had been notified by another pilot that there had been a terrible accident at the World Trade Center in New York City, that there had been a plane crash,” explains Frank. “Shortly thereafter, he came on again and said a second plane had crashed into the other tower.”

The pilot went on to tell the passengers that the United States was under attack and he had been ordered to land immediately at Gander Airport in Newfoundland. “We were just past the point of no return so we could not return to Ireland when they closed our borders,” adds Elise.

For those not in the know, Gander International Airport opened in 1938 as a refueling destination for trans-Atlantic flights. Planes, at that time, couldn’t carry enough fuel to make it overseas. It became known for its use in refueling American bomber planes during World War II.  The modern jet engine brought about the dramatic decline of traffic into Gander.  Still an active airport, private jets and cargo carriers are the main stop-overs at Gander, generally for refueling purposes.

The day of September 11, 2001, brought in much more than private jets and cargo carriers. Known for its long runways, Gander was the perfect spot to land planes that were 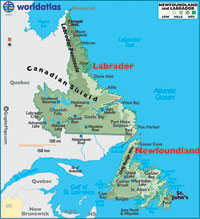 Newfoundland is an island off the eastern tip of Canada.

headed for the U.S.

“We were the first big jet to land, followed by 37 others, I was told,” adds Frank. “We stayed in the plane for another 19 to 20 hours while they organized a Canadian Task Force to unload us and make sure there were no terrorists onboard and to get us through some type of customs.” By this point it was Wednesday.

The town of only 12,000 began delegating different plane passengers to different locations. Buses arrived and passengers were sent to nearby towns to be housed in churches, schools and even individual homes in the small towns surrounding Gander. “We happened to be assigned to the Salvation Army Church in the town of Glenwood,” explains Frank.

“There were 63 of us and one bathroom,” adds Elise, “and no one complained.”

“We had people from 37 different countries in Glenwood, a town of only 1,200 to 1,500 people,” states Harold Pelley. “I was working outside at the house painting and there were buses going up and down the road all morning and I wondered where all those buses were going. So I got curious and went inside and there was Dan Rather and the pictures showing the two towers coming down.” It was now Thursday.

Harold then went out into town to see what was going on and “there were people lined up everywhere, sort of like looking out on the beach down below us,” Harold describes as he sits in the Delaney’s beachfront condo. “So, I stopped by the local Salvation Army Church and they explained to me that the planes were all down at Gander and the people had nowhere to go. I happened to look over on the steps and I saw Elise sitting down, dressed pretty elegant. I got out of the truck and said you don’t look very comfortable. Would you like to come over to our house and clean up and take a shower?”

Elise stated that it would be wonderful. She found Frank and, “off we went,” adds Harold. But first, like any good husband, he stopped by the local post office, Myrtle’s

Frank and Elise Delaney and Myrtle and Harold Pelley. PHOTO BY NATALIE STROM

place of employment, to receive her blessing.

The Delaney’s stayed for the day, had dinner with the Pelleys and were then invited to stay the night. They accepted.

“Myrtle took our clothes, washed, dried and pressed them and they were hanging on the Master Bedroom door in the morning,” Elise shares.

“They gave us their bedroom for the night. Can you believe that?” adds Frank.

“We always do that with our friends,” Harold responds simply.

According to Frank and Elise, the generosity, assistance and spirit of the “Newfies” was unlike anything they had ever seen. Many others were invited to stay in peoples’ homes but there weren’t even enough homes to house all the people. “It was like an assembly line, the women would come, pick up two or three people, bring them home, let them wash up, do their laundry and then drop them off and pick up another batch,” explains Elise. “I was just astounded. It was continuous, they just kept taking people.”

To offer a stranger fresh clothes, a shower and a comfortable bed comes naturally to Newfies. “We don’t know otherwise,” states Harold. “We don’t even know what crime is here because we have none. So we trust people, we knew that they were stranded and it’s just in our nature. There’s only about a half a million of us Newfoundlanders, so not many, but we do what we can.”

Frank and Elise finally made it back to the United States on a Saturday but have never forgotten the kindness of the town and especially that of the Pelleys.

After more than 11 years, the two couples finally reunited and spent a wonderful week in paradise. Taking a trip to the Everglades, Harold noted that it is much similar to the bog-like atmosphere of parts of Newfoundland and that, much like the Everglades has been changed over time, the bog was removed to build Gander Airport over the solid limestone underneath.

The beach, however, was far less similar and thoroughly enjoyed as was the entire week which the two couples spent getting reacquainted and enjoying the friendship that was made in the midst of tragedy.