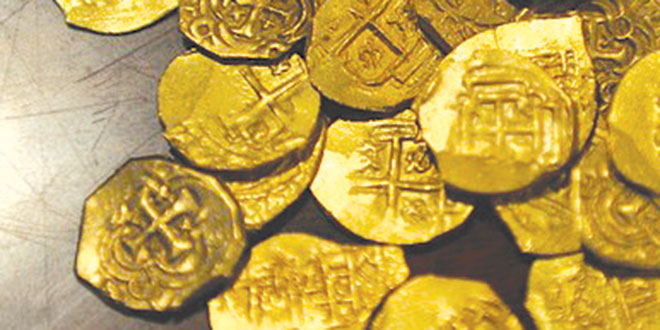 These are the winning numbers to the quest of the $10,000 Green Marco Diamond Ring. A blindfolded drawing consisting of 40 chart holders in the lottery pick with the correct co-ordinate numbers was held, and only one was chosen. The lucky winner of the Green Diamond Ring was Ms. Darlene Canton of Marco Island.

The following is a feeble effort to explain the method of my madness. Many found my quest difficult, but it also caused many to become dazed, confused and utterly confounded. Then, I can say, “Mission Accomplished!”

9 – A white and turquoise light house has been our logo for more than 10 years, and is right out front with the No. 9 written on it and the No. 9 in Roman numerals — IX. There also was an additional clue about feral cats having “9” lives.

55 – This number confounded most folks. To the left of The Little Bar in Goodland, there is a fenced-in house boat (a salty lady) dry docked in a cradle. The number that appears twice in a four digit number directly in front of the boat is the number “5” to make “55.” There was an additional hint from a rock and roll song by Sammy Hagar “I can’t drive 55!” recorded in 1984.

3 – The Roman Catholic Church on San Marco Road has a belfry with two bells. “Campana” is bell in Spanish. There is room for “3” bells in the belfry.

7 – There is an ancient saying: “I sailed the seven seas.” Besides being a magical number, “7” will appear when shooting dice in a one and six probability or a six in 36 chance is the number “7.”

5 – The restaurant I referred to is the Famous Snook Inn. In the parking lot, the sign is plainly marked “5 MPH.”

Congratulations to the 40 quest seekers who figured the quest numbers out.

The feedback has been positive, and we met and gained a lot of new customers and folks we had not seen in a while. I will consider doing something similar in the future. (That is unless my mother has me committed.)

I have been getting a lot of inquiries and requests for ancient Spanish coin jewelry. This can be a sore subject, especially when it involves informing the customer that the coin(s) they bought “in the islands” are a fake or better a forgery. Even the so-called official authentic certificates aren’t worth the cost of the paper they are written on. Any deceitful person can print up bogus paperwork and claim to sell the fakes as genuine.

Just last week a couple insisted I was wrong about their purchase. I pointed out that stamped plainly on the coin was the word “copy.” He then handed me another coin identical in every detail to the one in my hand. Duh? I know this much about Spanish coins they don’t have the word “copy” stamped on them, nor are two coins ever identical.

Even a well-known salvager — I dare not mention — was in hot water for “minting” old coins complete with certificates from the silver bars found on a famous wreck. The federal government was not amused.

Counterfeiting old coins is nothing new. Even the ancient Norsemen (Vikings) figured out how to dupe thousands by passing off fake silver coins as real. They have even found Roman “gold” or “silver” coins made of bronze and nickel alloys.

I am not an expert on old Spanish coins. Still, there are telltale ways to distinguish a genuine coin from a replica. I do have a fine eye for detail, and most fakes are obvious to me especially under 20x magnification.

I wore a replica coin with a custom gold frame that I created from an original (with the customer’s approval). While cruising antique jewelry shops in New Orleans years ago, a shop owner noticed my “Atocha” and commented on how beautiful a specimen it was. I replied it’s a fake. He said I must be mistaken. He was an expert. “That’s worth at least $2,000,” he said. I replied, “Okay, how many do you want at $100 each?” After I explained I made them in my shop from an original, he was dumbfounded by how good they looked. Some expert he was?

While owning my shop on Marco for 20 years, I have seen hundreds of Spanish coins, and only maybe 10 or 12 were the real thing. That’s pretty scary considering the serious money the other folks shelled out for fakes.

My advice is seriously do research on the coin or coins you intend to buy. I can spot a fake immediately if I see traces, casting marks, seams or especially traces of air bubbles on the sides or surface of the coin(s).

Spanish coins were not created by a casting process. They were melted into roundish ingots, sliced like baloney to weigh a certain amount, and then stamped with a heavy hammer in a crude stone or metal die.

The experts have their ways I’m sure. They can date the metal in the coins and even tell what mine the silver or gold came from.I’m always skeptical when one is presented to me, and then I have to listen to sordid stories about how the coin(s) were acquired and how they practically stole them. I just don’t have the heart anymore to look too carefully. “Wow! That’s nice!” I say. The fact it’s a fake, I now keep to myself. Why should I be the wet blanket?