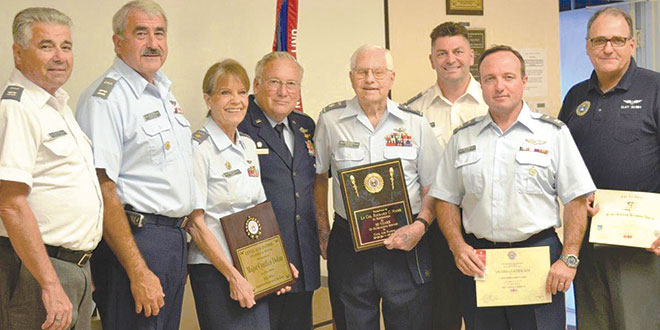 Lt. Col. Richard C. Niess has loved flying all of his life. Losing sight in his right eye in 1941, he was told that his lack of depth perception would keep him from ever being a pilot. This posed a challenge that Niess gladly accepted. He immediately took a job with a defense contractor and learned to fly, and has been soaring now for more than 70 years.

On Monday, April 21, his illustrious career in the air hit a pinnacle when the Civil Air Patrol National Headquarters, Florida Wing, and the Marco Island Senior Squadron honored Niess for 50 years of membership with the 50 Year Red Service Award.

A member of the Marco Squadron since 2005 when he relocated to Florida, Niess has worked as the Public Affairs Officer since 2006. At the age of 90, 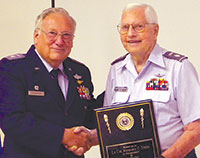 he was awarded the Marco Island Civil Air Patrol Member of the Year award of 2011.

Born in New York City in 1929, and raised on Long Island, NY, he attended the Virginia Military Institute and earned his bachelor’s degree in Engineering. He joined the Civil Air Patrol (CAP) in Stanton, Virginia, in 1964 and has since served in five different CAP Wings, three Regions and served on the staff of five Cadet Encampments from 1966 to 1972. He proudly recalls a CAP mission in Virginia where he had a hand in rescuing Audie Murphy, one of the most decorated United States Army combat soldiers of WWII. 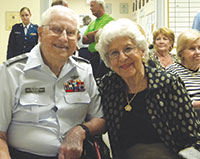 Lt. Col. Richard C. Niess and his wife, Lt. Col. Ann Niess, have been members of the Civil Air Patrol for 50 years.

the PA Wing and the Middle East Region.

He also served as a member of the Virgina Coast Guard Auxiliary for 15 years. When he came to Marco Island, he joined Flotilla 95, but has since retired.

Niess chose to fly for the CAP because he believes it’s a good cause.

“I think it is quite important to the community here,” said Niess, referring to the CAP’s key involvement in the BP Deepwater Horizon oil spill in 2010. They provided the air patrol surveillance, getting a bird’s eye view of the situation and thus aiding in containment. Additionally, when emergencies arise and a boat’s radio won’t reach the Fort Myers US Coast Guard station, the Marco Island Civil Air Patrol will respond.

Wife, Ann Niess, gives her honoree husband a sweet congratulatory smooch after he received his award.[/caption] class=”CBNGeneralContent”>The CAP’s Cadet Program also is very important to Niess. He was instrumental in developing Virginia Wing’s program for the ultimate Cadet award, the Spaatz. Time spent as an active participant in the International Air Cadet Exchange ranks highly among some of his most memorable CAP experiences.

“The Cadet program is, in my view, one of the finest youth programs for teenagers, both boys and girls,” said Niess. “It provides a complete family experience that keeps parents and teens busy and involved in each other’s lives. The most fun to be had in CAP is at the Squadron Level.”

He speaks from personal experience. His three children, his wife, Lt. Col. Ann Niess, and he have all participated in Squadron activities and Cadet Encampments together. In fact, Ann will be recognized for her own 50 years of CAP membership in October 2015.