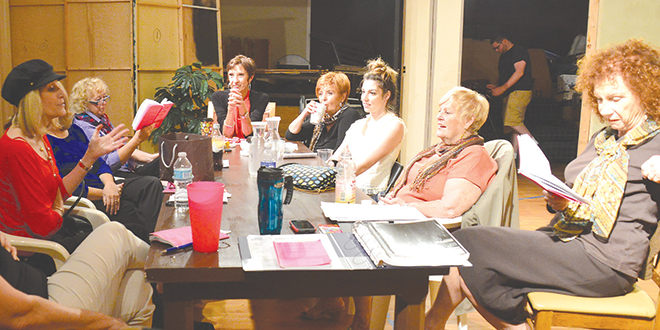 The cast of “Love, Loss, & What I Wore” rehearses.

The Marco Players is still going strong 40 years after staging its first production. “Challenging ourselves to do better and better work, a good fiscal outlook and having actors and directors who want to work here,” has been a key to the theater group’s longevity and success said Beverly Dahlstrom, its artistic director and president of its board of directors. “This doesn’t mean everyone will like everything we do,” she added. “But the work that we do is interesting and varied. Technically, like all the 501cs (nonprofits) on the island, a successful show is what brings in revenue. We are a small business on Marco Island and we realize that our patrons want to see funny and meaningful events and productions. We try to bring that to our stage.” Operating from an 83-seat theater in the Marco Town Center Mall, The Marco Player’s offerings span the broad spectrum of theatrical productions, everything from dramas, to comedies, to children’s theater, solo performances, Shakespeare, its Ladies Who Lunch Series and more. Founded in 1975 as a children’s play reading group, The Marco Players became a for-profit, adult community theater group known as The Marco Island Players a few years later. It later incorporated as a nonprofit corporation, under The Marco Players name. The group had no home base for much of its existence, staging productions at a variety of locations, such as the island’s Radisson, Marriot and Hilton hotels, in local restaurants and at the Town Center, where it set up shop 14 years ago. Dahlstrom pointed to several other reasons for The Marco Players having achieved its ruby anniversary as a vibrant and going concern.
“We look to the new talent, actors and directors that come to us from around our area, actors with a passion, who want to be on the stage,” she said. “Some of our best productions are with a mix of new talent and seasoned actors.” Dahlstrom said the group also provides opportunities to new directors who might otherwise not get a chance to practice their craft in other theaters. “We
give that opportunity to them,” she added. “I think that is what has kept us around so long.” Dahlstrom came part of The Marco Players family in 2001, when former board president Judy Daye asked her to direct a play. She was then asked to join the board, becoming its president six years ago, later adding the title of artistic director with the retirement of Richard Joyce. She has seen a multitude of changes
since joining the board, including a the decision she and former board member Jim Lopas made about five years ago to rebrand and remodel the theater, which also included adding a Facebook page, Twitter account and a website that features on-line ticket purchasing capability. “This improved our sales and made the theater a really nice place to come and see
local people doing what community theater is supposed to do, do great plays that people enjoy,” said Dahlstrom. “Unlike years ago, we don’t have much trouble finding directors or actors anymore. Most of our directors want to come back each year and the same is true of our actors. Our reputation for doing quality work brings in patrons and performers alike. All these things are accomplishments I am proud of.” In 2014, Marco Players became part of
the newly formed Cultural Alliance of Marco and Goodland, which also includes the Goodland Arts Alliance, the Island Theater Company, the Greater Marco Family YMCA, the Marco Island Center For the Arts, the Marco Island Foundation For the Arts, the Marco Island Historical Society and the Marco Island History Museum. “The alliance of these organizations has helped us all unite the arts community on Marco Island,” said Dahlstrom. “We are all aware of each others’ events, and spread the word about each other. Most of the organizations get coverage and are more aware of their need to get the information out to the papers early. When related topics come up on the island that would involve the arts, someone from our organization appears and speak to that topic to the city council. We recently had a proclamation from the City of Marco Island designating March 18th as Arts and Culture Day.” The Marco Players has also expanded the number of productions it presents annually from three to four and extended the number of performances for each show from 12 to 15. This season, the Naples-based Shakespeare in Paradise theater group will present “The Merry Wives of Windsor” April 16-19, April 23-26 and May 1-3. The Bard’s work will also be on display May 22-24 and May 30-31, when the Marco Island Academy stages “Macbeth” at The Marco Players Theater. “Love, Loss & What I Wore” by Nora and Delia Ephron, is the Marco Players current production. Directed by Dahlstrom, the play runs until April 4. The play is a set of monologues that focus on female relationships, using a women’s wardrobe as a time capsule of a her life. For more information about “Love, Loss, & What I Wore,” tickets and more, visit themarcoplayers.com/.