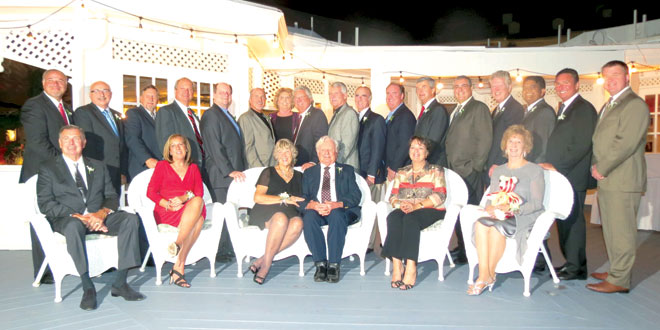 Marco Island’s Chamber of Commerce celebrated its 35th Anniversary and the beginning of the Christmas Season on December 2nd at Bistro Soleil in Old Marco. 184 celebrants, including most living past chamber presidents, enjoyed soft breezes on the terrace while sipping cocktails and nibbling on hors d’oeuvres. It resembled a school reunion as old friends had a chance to mingle outside of daily chores and occupations.

Scott Campbell, CEO of Physicians Regional Healthcare System, led off the pre-dinner proceedings as the Jade Sponsor of the event. He spoke glowingly of Marco Island, the Chamber, and the extensive plans of the Physicians 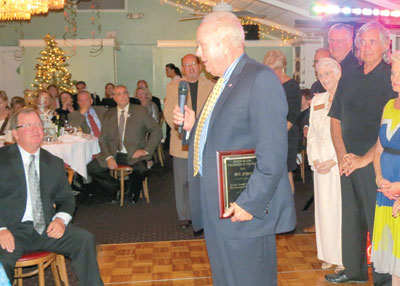 Regional Healthcare System to create a community facility. Construction is well underway at the Shops of Marco on South Barfield and the facility, including a walk-in clinic should be open in January. 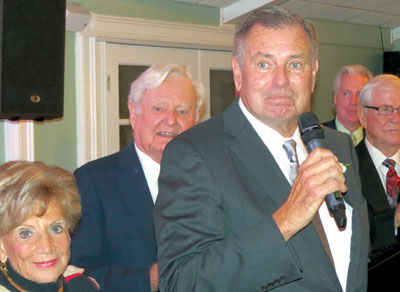 Then came the prestigious annual awards. First up was the 2012 Marco Island Volunteer of the Year, presented to Bill Filbin. He has a record of volunteer work about as long as Residents Beach. After serving in Vietnam in several capacities, Mr. Filbin devoted himself to helping others, whether by serving dinners to the needy, providing assistance to countless veteran’s organizations, or participating in civic service clubs and charities. In accepting the award Mr. Filbin was eloquent in thanking the people of Marco for doing so much to 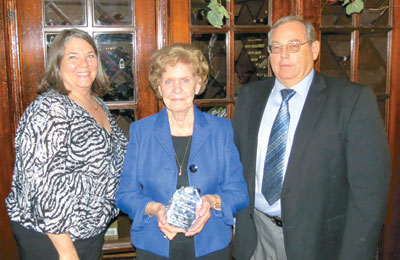 help others, and urging islanders to continue down that path.

The, long time resident Tarik Ayasun was utterly surprised to receive the coveted Lifetime Achievement Award. He has dedicated himself to everything from coaching youngsters how to play soccer, to serving on the Code Enforcement Board, to serving as President of the Chamber to acting as President of the Board of Directors of the Marco Island Charter Middle School. He was obviously overcome by the remarkable portrait of him by J.J. Stithcomb, and got a good laugh when, on being handed his crystal award, asked his wife Janice, “Did we make that”? Tarik arrived in 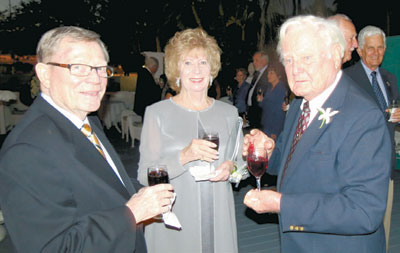 the United States from his birthplace in Turkey. It didn’t take long to establish himself. He entered the University of Maryland and was a star goalkeeper on Maryland’s championship soccer team. Without any money he labored long and hard to become a successful entrepreneur and civic leader. He met Janice at the University of Maryland and later married her, proving the worth of attending a college or university. His love of the United States was immediate, and he became a citizen as soon as possible.

Dave Rice received the 2012 Citizen of the Year Award and, by so doing, became the first Marco Islander to 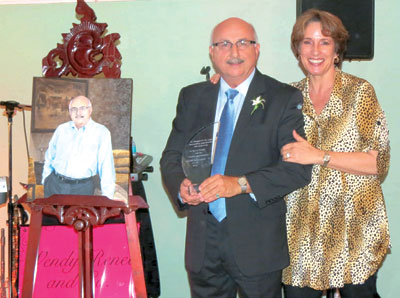 receive that award and the Volunteer of the Year Award back in 1997. Mr. Rice also has a distinguished record, and may be unique in the number of “big projects” he has led. He was a driving force and leader of Christmas Island Style for a number of years, he participated in a rescue operation for the Marco Island Art League and recently was one of the leaders of the “Big Flag” group. He has always been available to take on the tough assignments, and carry them out successfully. 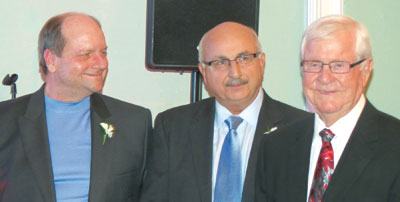 the ceremonies and thanked her staff of two – Katie O’Hara and Donna Niemczyk – for their dedication and plain hard work, and also thanked and praised the Chamber’s staff of friendly and helpful volunteers who welcome and assist visitors and islanders.

All were wished a Very Merry Christmas and Happy New Year and “At least 35 more years of success at the Chamber.”