32 Gulfport to Face the Wrecker’s Ball 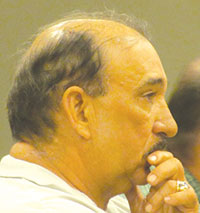 Roberto Roque, who was seriously injured by a fire and explosion in his home at 32 Gulfport Court two years ago, appearedbefore the Code Enforcement Board to discuss options for the condemned propertythat is currently under contract for sale.

At the March meeting of the City’s Code Enforcement Board, Officer Patrick Hayman reported on the progress of a property at 32 Gulfport Court, which had been cited as a public nuisance and an unsafe structure following a serious fire and explosion that injured the home’s owner, Roberto Roque (Roberto Roque Revocable Trust) in early December 2012. The property also has required extensive work on a sinkhole that appeared.

Roque appeared at the hearing to explain that he had tried to prepare the house sufficiently for sale and then realized the structure was beyond salvaging. He also has spent almost $90,000 to repair the sinkhole.

Hayman said the family had a deadline of January 4 to repair the violations and that several offers to sell the property had not been successful.

Al Cahoon of Marco Island appeared at the meeting to say that he currently has an offer on the property to purchase it “as is” with a March 31 closing date. His plan is to have the house demolished and then sell the vacant lot. Cahoon said he intends to pay for the sewer hookup but not the city’s hard 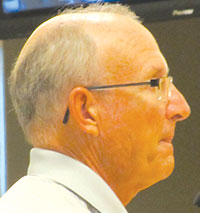 Al Cahoon of Marco Island intends to purchase the property at 32 Gulfport,demolish the house and sell the lot.

costs or maintenance fees which are approximately $2,000.

City staff advised Cahoon and Roque that these costs and the city’s lien against the property would have to be settled before a demolition permit would be issued.

Roque was given 30 days to pay the costs. The eventual property owner will then have 60 days to obtain the permit and demolish the building or face fines of $200 per day. If the city demolishes the property after the 60 days, costs incurred would become part of the owner’s fine.

In other action during the meeting, former city councilor Heyward Boyce appeared on behalf of his daughter and son-in-law, Ann Boyce and Kevin O’Neill, who had purchased a property at 83 Madagascar Court. They had appeared before the Board at February’s meeting, but as the property was not in compliance at that time for failure to connect to the city’s sewer system, mediation could not be arranged. Boyce reported that after receiving title to the property on February 24 and bringing it into compliance almost immediately, the sewer assessment fee, hard costs and the city’s administration fees had been paid. The board voted unanimously to waive all fines.