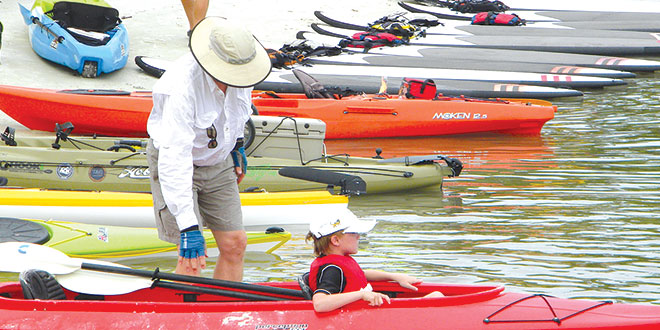 Rescue vessels were on hand to assist in the case of an emergency. Even the youngest attendees took part.

Southwest Florida’s trademark bugs and humidity didn’t deter standup paddle board (SUP) enthusiasts of all ages from enjoying the 2nd Annual SUP Poker Run on Saturday, June 14. The Capri Fish House on Isle of Capri was packed to the gills with volunteers, coaches, participants, athletes and professionals who came to support sending the local Special Olympics (SO) athletes to this year’s SUP Invitational in Key West. 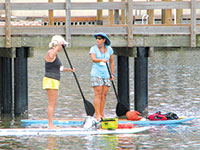 Conversation while riding, clearly a sport that allows for some socializing.

money to help offset the cost of attending the highly anticipated invitational, which includes bussing, food and housing. For now, they have to raise their own funds because SUP is a new sport and newly introduced to SO.

“SUP isn’t a sanctioned SO sport yet, but it will be soon,” said Stephanie Dangler, SO parent and owner of Stephanie’s Pest Control. She got involved when her son tried SUP and loved it. She said she has been addicted ever since; it has become 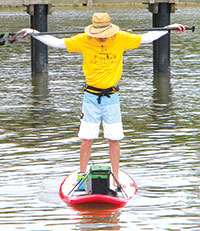 A leisurely floating boarder waits for the run to begin.

“We started in just two counties, Collier and Monroe, and we progressively moved through counties across the state of Florida. We got people trained, and then they started their own teams,” said Dangler. “We started with just three athletes, and now we have 27, twice as many as last year.”

“She came up with the idea for our SUP Poker Run and followed through on every detail,” said Becky Newell, fellow SO parent and organizer, of Dangler, who was visibly in 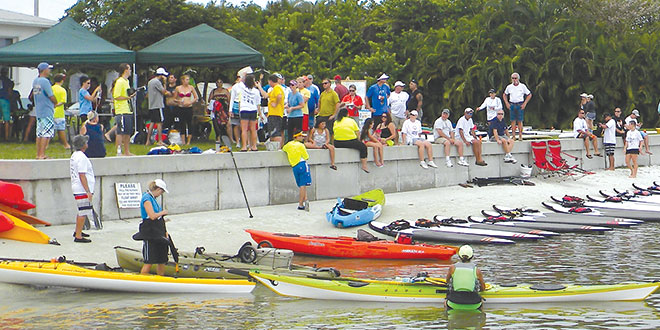 The day began with a flurry of activity, while the rainbow colored array of boats and boards awaited their riders on the beach below. PHOTOS BY MELINDA GRAY

charge of making sure the event ran smoothly amongst the flurry of activity.

“These kids love it! I’ve been with some for eight years, and once we got them on a board, I had some of them talk that hadn’t spoken to me for years,” said Dangler.

“This event is so much fun. You get so many people involved in it from all over the community, it’s just a great event,” said Newell.

Stand-up paddle boarders of all ages rounding the first corner of their route that day.

County (SOCC), was among those on hand to help. This is the SOCC’s fourth year working with this SO SUP team here in Collier County.

This year’s official SUP Poker Run began and ended at Capri Fish House with stops along the way at Rose Marina, Snook Inn and Island Gypsy. Participants collected their cards one by one in hopes of ending the event with the winning poker hand.

“These stops welcome us with open arms; anything for Special Olympics and to see these kids smile. It’s worth everything,” said Dangler.