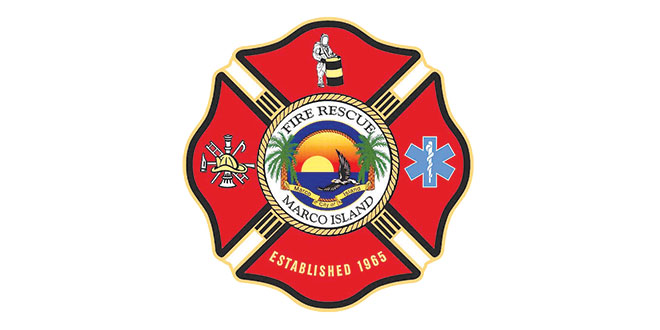 Governor Rick Scott recently signed the 2016-2017 state budget, providing funding of $250,000 for a Marine Fire Rescue Facility on Marco Island. To find out more about the existing facility, community needs and how the state funds would be used, Coastal Breeze News spoke to Fire Chief Mike Murphy.

The present facility, built in 1965, is located at 751 E. Elkcam Circle. The station responds to approximately forty percent of all emergency calls, and also houses the fire/rescue boat, which responds to 911 emergencies on the waterways surrounding Marco Island and the 10,000 Islands. The boat is located on a lift behind the station in Walker’s Marina.

There are over 7,000 registered marine recreational vessels in Marco Island. That is an average of one boat for every 18 residents on the island. There are over 25,000 registered recreational vessels in Collier County as a whole, or one boat for every 13 residents. Coastal development, an ever-increasing number of boaters, and the diversity of recreational boating activities have had a positive economic impact on Florida, bringing in $18 million annually.

Since 1990, the City of Marco Island Fire Rescue Department has been a primary response to fire and medical marine emergencies in the Gulf of Mexico/10,000 Islands-area surrounding Marco Island.  In 2013, the Marco Island City Council approved the acquisition of a state of the art fire rescue EMS vessel, which has responded to over 100 marine emergencies each year. Florida’s recovering economy, six artificial reefs constructed by BP after the 2010 oil spill, a $250 million renovation and expansion of the Marco Island Marriott Beach Resort, a $30 million renovation of the Hilton Marco Island Beach Resort, and increased commercial and residential development in the area, all contribute to the need for improvements to local marine EMS services. The closest U.S. Coast Guard station is located in Fort Myers, and has a very long response time.

Because of its age and the fact that it does not meet the current hurricane and building code specifications, the station on Elkcam suffered damage from direct hits of Hurricane Wilma and Tropical Storm Fay. Roof damage resulted in water damage to the station’s interior. The city has been making Band-Aid repairs in order to maintain the quality of our marine EMS services.

The City of Marco Island originally requested $1 million from the state for a new fire station to be constructed on the current site or other waterfront property owned by the city. The facility would provide housing of the fire/marine EMS crew to enable rapid marine response deployment. It could also provide a training room specific to marine response with the Collier County Sheriff’s Department and the Marco Island Police Department. The request was reduced to $250,000 and approved by the state.

Although the details of the grant have not yet been outlined for the Fire Rescue Department, it is believed that the grant will include a time frame within to expend.  Chief Murphy indicated that once the specifics are received and reviewed, we look forward to presenting a plan to the Marco Island City Council for its approval as a capital project.