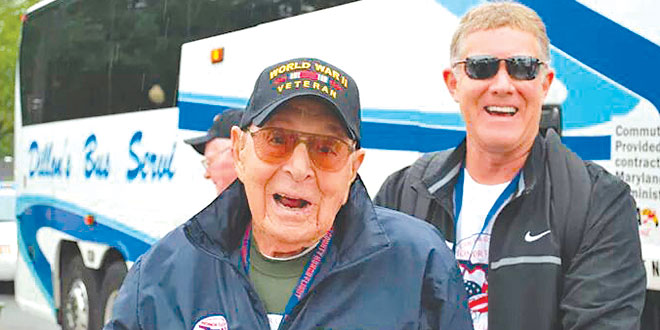 Mel Ollman, a Marco Island resident since 1967, is in the prime of his life at 95 years of age. He and two other Marco Islanders — Francis O’Connell and Rudy Balocki — were among our World War II military heroes honored in September by Honor Flight of Collier County. Mark Sturdivent served as Guardian to Francis, while Jim Prange was Rudy’s Guardian for the trip.

The magic began at 2:15 AM when I arrived at Mel’s apartment on Bald Eagle Drive. He was waiting for me enthusiastically at the door. My job was to be his guardian for the trip to Washington, D. C. We drove to Naples Airport to join some of the other 73 veterans to be honored and to board a bus to Southwest Florida International (RSW) Airport. Leaving the waiting room at Naples Airport, Junior ROTC Cadets saluted the heroes with crossed sabers.

With full police escort and no stop lights, we proceeded to RSW where we boarded our chartered Allegiant Air MD 80 jet. Neither Mel nor I had ever enjoyed a police escort, and it is amazing how quickly you can travel if everyone gets out of your way. As we left the gate, we were showered by a twin water cannon salute from the airport fire department pumper trucks.

Our nonstop flight took only two hours and allowed time for the Vets to get to know each other. Upon our arrival at Baltimore Washington International Airport, once again we were greeted with a 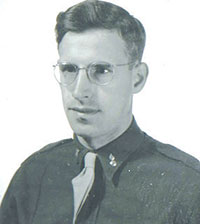 Mel Ollman was a secondlieutenant in the U.S. Army, assigned to the Army Air Corp. Below, he is pictured with his daughter, Karen.

twin water cannon salute. A couple hundred well-wishers greeted us as we left the jetway into the airport. The conviviality of the occasion placed an ear-to-ear grin on the faces of our honorees. We boarded another bus, and this time the U. S. Park Police provided our blue and red light escort to the World War II Memorial. It was raining and 62 degrees, but who cared? Our Vets were VIP’S for a day.

Our next stop was across Memorial Bridge at the Marine Corps War Memorial. The rain was beginning to pour, so our bus with police escort circled the statue of the four Marines raising the flag of our country over Mount Suribachi on Iwo Jima. The sight raised goose bumps and pride in all.

As the rain tapered to a mist, we rode up the hill of Arlington Cemetery to the tomb of the Unknown Soldiers where our Vets placed a wreath. By now, the rain had stopped, and the sun began to shine. The ceremony of the changing of the guard and the laying of the wreath left few dry eyes.

Our last stop was at the Lincoln Memorial where we viewed the Korean War Memorial, the Vietnam Memorial and later ambled along the reflecting pool. Everywhere we went bystanders thanked our Vets for their service to our country. Mel felt overwhelmed by the love and respect shown by those along the tour.

The best was saved for last. Upon our

arrival back at Southwest Florida Airport that evening, 73 really tired World War II veterans along with their guardians and volunteers were met by at least 1,000 well-wishers, including brass bands, bagpipes, Boy Scouts, Girl Scouts, barbershop singers, school groups, friends and family each thanking our Vets for their patriotism and service. We then boarded yet another bus and with another police escort we traveled back to Naples Airport where we found our car and returned to Marco.

We finally ended our magical day 23 hours and 50 minutes from the time of departure. Captain Mel Ollman, U.S. Army, Retired, was a sleepy but happy man. America still loves her heroes who saved the world from the axis powers and allowed us to remain, “home of the brave and land of the free.”

Honor Flight of Collier County did a tremendous job of organizing this third Honor Flight for Collier County World War II Vets. It was an unforgettable experience for both of us. One more flight will take place in October of this year.

Mel wants to thank all who greeted our Vets upon our arrival back in Southwest Florida as well as those who wrote letters for the mail call on the plane flight back.

Mel Ollman was drafted into the Army in September of 1940, 15 months before America entered the war. He was a sophomore in college at the time, and it was what was called a precautionary draft. America had almost completely disarmed after World War I 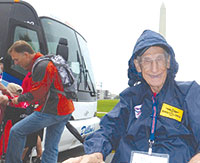 Mel takes in the Washington Monument.

(“the war to end all wars”) and only a skeleton armed force remained. President Roosevelt knew that although America didn’t want another war; if war came, we needed to try to be prepared.

After his basic training, Mel took the examination and qualified for Officers Candidate School. Upon his completion of training, he graduated as a second lieutenant. He was assigned to a very special and dangerous unit of the Army Air Corps. Only two units of this nature were created in the entire Army, one which was later assigned to the Atlantic Theatre and Mel’s unit which was later to be assigned to the Pacific. His unit’s job was to join in with the Marines and Army Special Forces as the first wave of an invasion force. They were to advance as quickly as possible to the air strip. They were to secure the air strip and make any repairs necessary so that our airplanes could land and take off.

On Dec. 7, 1941, when the war began with the bombing by the Japanese of Pearl Harbor, America was not ready yet for war. Because we were not prepared, the Japanese invaded and took most of the pacific islands. Mel and his group were assigned to the invasion force designed to take back the Pacific, and they did — capturing island after island with the blood sweat and tears… and sometimes the lives of our American and allied countries soldiers. 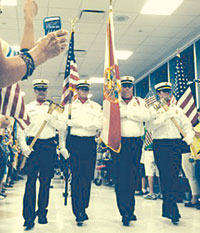 The colors flew high at RSW.

Pacific. In the summer of 1942, 60,000 ground troops headed for the Pacific in troop ships to accomplish this goal. On Aug. 7, 1942, Mel and his group landed on the beach at Guadalcanal with the sole purpose of capturing the air strip. While fighting was still going on all around them on the island, they began the job of completing the air strip started by the Japanese. They also lengthened the airfield so that our B24 and B25 long-range bombers could land. When this task was completed, they moved on up the Solomon chain of islands and repeated their task with each island that had an air strip. When finally Japan surrendered on Sept. 2, 1945, Capt. Ollman was on the island of Leyte in the Philippines.

Upon discharge, Mel went to Perdue University on the G.I. Bill. He had married Gertrude before being shipped out in 1942 and by now had a young daughter, Karen. In May 1948, he graduated with a degree in mechanical and industrial engineering.

Mel has had a long and good life with a marriage to Gertrude lasting 68 years until her passing. He also has two daughters now living in the Mid-West. Mel is an inventor and promoter of open web light steel trusses in the construction of buildings. His unique approach was to use the whole building including its external skin in engineering the components. At 95, he is what he describes himself as “a problem solver.” He is still in business on Marco Island developing a system of metal residential buildings.