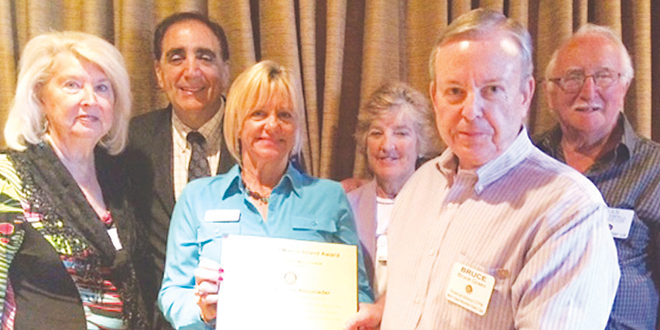 Giving selflessly to benefit the greater good is a pleasure for Condee Cooling and Electric. “The things we can help out with for which we have the resources, we’re happy to do that for the community that supports the families that we provide with employment,” said Erik Condee, the company’s operational coordinator. Condee Cooling and Electric has been named one of the recipients of the 2015 Spirit of Marco Island Award presented by the Noontime Rotary Club of Marco Island. Now in its seventh year, the award recognizes civically involved individuals and organizations for their contribution of time, talent and financial support to the community. Joining Condee Cooling as a Spirit of Marco beneficiary this year are Douglas and Grace Herr, Marco YMCA CEO Cindy Love-Abounader and her husband, George Abounader, principal of Marco Island Charter Middle School Principal, attorneys Neil and Rebecca Snyder, and Carole Roberts. The awards will be formally presented at a Gala Awards Dinner and Silent Auction set for April 25 at the Bistro Soleil Restaurant, located in Old Marco. Proceeds from the event and silent auction are used to support local charities and scholarships. Condee said gratitude for the honor should be spread among all of the company’s personnel. “It’s really all of our people who help out on projects around the community,” he added. “We’re pretty humble people, but we appreciate being recognized as one of the many players who are in the background. We help out where we can. Our business – service and construction – is really a low- (profit) margin business, so we don’t really have a lot of resources to help out with a lot of things. Really, where we help out is in providing a service using our equipment, our staff and our (professional) experience.”

In business on Marco for 46 years, Condee Cooling and Electric was chosen for the award for their many years of community service in support of the island’s many civic organizations, according to Al Diaz, chairman of the Noontime Rotary’s Spirit Award Committee. Over the years, Condee Cooling & Electric staff members and equipment have regularly assisted with such community events as Christmas Island Style, functions for the island’s Rotary and Kiwanis clubs, and those of the Greater Marco Family YMCA, as well as the annual Marco Island Seafood and Music Festival. The company has also supported the Marco Island Art League and two visits of the Vietnam Traveling Wall Memorial.

“Erik Condee, who is a member of

the Sunrise Rotary Club, is also very much involved in the community by donating his time to work with the Meals of Hope program and the Marco Island Annual Seafood & Music Festival,” said Diaz. The recipients all learned of their selection from Noontime Rotary officials while going about their daily lives, in many cases, while they attended meetings of the community organizations in which they are a member. The Herrs were taken aback when Diaz and a contingent of Noontime Rotary Club members and friends of the Herrs made the announcement while the couple was having dinner with friends at the Hideaway Beach Club. Bill Dean a past Spirit of Marco recipient, nominated Mr. & Mrs. Herr for their 19 years of work with the Guadeloupe Center in Naples, where they’ve donated thousands of volunteer hours and been major financial contributors. The Guadaloupe Center provides educational, social and other support programs and resources for the underprivileged. With the Herrs’ support, the center’s Early Childhood Education, After School and Tutoring Programs have grown from 30-to-40 students and four-to-five tutors, to nearly 300 students and 170 Tutors. The couple has also been heavily involved, locally, with Habitat for Humanity for years. “We were totally surprised,” Grace Herr said of learning that she and her husband had been named as recipients. “We didn’t even know there was anyone in the Rotary Club who would know what we were up to.” Grace Herr said their involvement with both nonprofits and anything they do to help children, has been a pleasure. “We believe in programs that help people who are trying to help themselves, she added. The Abounaders were notified of their selection at a recent Noontime Rotary luncheon when Bruce Graev, the club’s president, made the announcement and presentation in front of fellow club members and guests. “I was very surprised,” said Cindy LoveAbounader. “I don’t expect awards. That’s not why I do what I do. So I was very surprised to be honored for the work that we do in the community.” George Abounader said Diaz had previously informed him that his wife’s selection was going to be announced at the meeting, but made no mention of the dual notification. “So when the announcement was made and my name was also mentioned with Cindy’s, I thought there was a mistake and then when I saw Al laughing, I knew that he was pretty crafty and outsmarted me,” he said.

Cindy Love-Abounader has been with the Marco Y for

20 years and she is also an active member of the Noontime Rotary, where she is a past president and recipient of the 2008 Rotarian of the Year award. During her tenure at the Y, she has been instrumental in increasing funding for programs that support underprivileged children. The Y helps over 1,000 children a year through literacy and math summer camps, the YREADS program, Early Childhood Learning, after-school programs and many wellness and social services. In 2012 she was awarded the “Educational Commissioner’s Award” by the Florida Department of Education. George Abounader has been the CEO/Principal of the MICMS for 16 years. He is also a past President of the Noontime Rotary Club and in 2013 was the recipient of the “Marco Island Citizen of the Year” award. In 1992, he received the “Edmund Rice Distinguished Educator” award. Under his stewardship, Abounader has led the school to rank among the top 3% of Florida’s public middle schools and MICMS has received 14 “A” ratings and the designation of “High Performing Charter School.” “I not only feel honored, but also humbled to be one of the recipients of this award because there are many individuals on the island who have done so much for others and are also deserving,” he said. “It’s exciting to receive this award with my wife because anyone who spreads goodwill and spirit among others needs to be filled with that same spirit. That spirit and the goodwill that I share are provided to me by my wife and my Catholic upbringing. It is always a special privilege to help others, but when you have a partner that not only supports those efforts, but also actively participates, it is heartwarming.” Cindy Love-Abounader echoed those sentiments. “With George as my partner, I think we’re able to accomplish even more things with the community service projects that we do,” she said. “We’re both so community oriented, that it’s not in our character to say, ‘No,’ when it comes to being part of something.” The Abounaders, the Herrs and Condee Cooling and Electric, along with fellow recipients, Carole Roberts and attorneys Neil and Rebecca Snyder, will be formally presented with their awards at a Gala Awards Dinner and Silent Auction set for April 25 at the Bistro Soleil Restaurant, located in Old Marco. Proceeds from the event and silent auction are used to support local charities and scholarships.

For information and tickets to the Gala Awards Dinner and Silent Auction, contact Al Diaz at 438-5285 or by email at royalmarcoway@marcocable.com