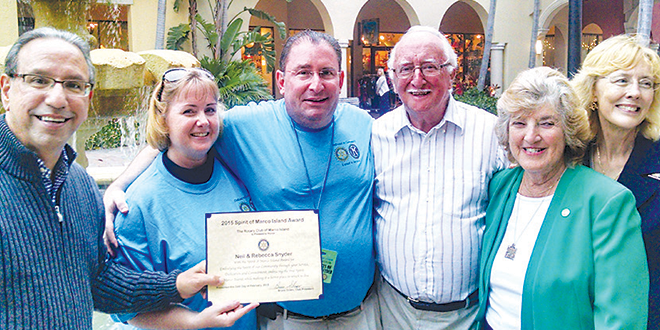 Shock at haven been selected is a common shared reaction for the recipients of the 2015 Spirit of Marco Island Award. “I’m very excited, said Carole Roberts, who is one of the eight recipients this year. “I think it’s great. I can honestly say I was totally surprised.” Now in its seventh year, the Spirit of Marco Island Award is presented by the Noontime Rotary Club of Marco Island. The award recognizes civically involved individuals and organizations for their contribution of time, talent and financial support to the community. R

oberts is joined this year by attorneys Neil and Rebecca Snyder, Douglas and Grace Herr, Marco YMCA CEO Cindy LoveAbounader, Marco Island Charter Middle School Principal George Abounader and Condee Cooling & Electric. They will be formally presented with their awards at a Gala Awards Dinner and Silent Auction set for April 25 at the Bistro Soleil Restaurant, located in Old Marco. Proceeds from the event and silent auction are used to support local charities and scholarships. The recipients all learned of their selection from Noontime Rotary officials while going about their daily lives, in many cases, while they attended meetings of the community organizations in which they are a member. Roberts was at a recent Board of Directors Meeting of the Cultural Alliance of Marco Island and Goodland when Noontime Rotary President Bruce Graev stopped in and announced she had been chosen for her service to numerous local organizations over the years. She is active with the Marco Island Historical Society and is a founding member of the Cultural Alliance of Marco Island and Goodland. Roberts is also a board member with Shelter for Abused Women and Children in Naples, and she has served on the Veterans Memorial Fund Raising Committee, the Traveling Vietnam Wall Committee, and the original Big Flag Committee. “It really, really means a lot to me,” Roberts said of the honor. “I think it’s a wonderful award. It’s a nice feeling to be recognized by others in the community. It is a nice thing to be recognized by Rotary. I’m retired. I’m not a business person. I’m not a member of Rotary so it’s very nice for them to have recognized what I’ve done in the community. I like the

name, the Spirit of Marco Island, because I think Marco Island really does have a spirit.” The Snyders are the founding attorneys of the The Law Offices of Hodge and Snyder on Marco. Al Diaz, chairman of Noontime Rotary’s Spirit Award Committee, said recognized largely for their work with the Meals of Hope. Under the couple’s leadership, the organization has raised money and held mealpackaging events that have provided nearly 800,000 meals for people in need over the last four years, he added. Neil Snyder is a member of Marco’s Sunrise Rotary Club, a past recipient of the Rotarian of the Year Award and also their club’s president-elect nominee. Rebecca Snyder is a past president of the Marco Island Kiwanis Club and also a past recipient of the Kiwanian of the Year award. They are also actively involved in numerous other local civic associations. “We’re honored because we do what we do for the community is not for recognition, but just because giving back is the right thing to do,” said Neil Snyder. “To be recognized is unexpected.” His wife echoed those sentiments. “It’s unexpected because there are so many people on Marco that do so much for the community,” said Rebecca Snyder. “It was an unexpected and very nice surprise.” They Snyders were notified while attending a recent Meals of Hope Cocktail Hour Fundraiser hosted by CJ’s by the Bay in the Esplanade Shops. It was Diaz who presented them with their award certificates on the behalf of the Noontime Rotary Club. “It’s not often that I don’t have something to say,” said Neil Snyder. “When Al Diaz announced that we were winners, I was speechless. I was without words.” Rebecca Snyder said she was equally surprised, if not more so. She had received word of her husband’s selection prior to the cocktail fundraiser, said Neil Snyder. “But they did not tell her it was going to be a joint award,” he added. “So they got her twice. Here we are, two litigation attorney’s, just speechless.” The reactions of the Abounaders, the Herrs and Erik Condee of Condee Cooling & Electric will be presented in the April 17 issue of the Coastal Breeze. For information and tickets to the Gala Awards Dinner and Silent Auction, contact Al Diaz at 438-5285 or by email at royalmarcoway@marcocable.com.