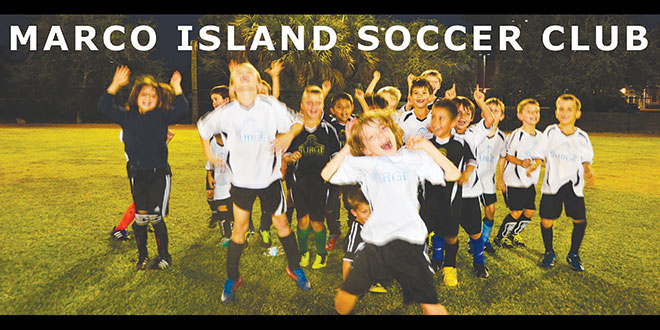 The Marco Island Soccer Club or Surge as some prefer to call it, was started a few years ago by local soccer proponents who felt it was time to target their focus on this particular sport. The philosophy worked and in its very first year the club came home with trophies from championship games in Orlando. The ability to travel was just one reason the club was formed. Since those days, the club has undergone a number of changes and the sport has continued to grow in popularity.

The 2014 fall season of the Surge Academy is just starting. It’s open to all youth ages 3-18, all skill levels. According to Club President, Chadd Chustz, “The club is pleased to announce a new Academy Director, Rob Stoutenburg, Sr. Rob hails from the Netherlands, where he played and coached with the Amsterdamsche Club Ajax. Rob brings a wealth of professional experience to the Academy. He’s coached every level of the game: semi-pro, college, high school to the youth academy of Pro-Touch International Soccer Academy for the past 20 years. Rob will help us with the technical development of our youth but also he can help us to help the 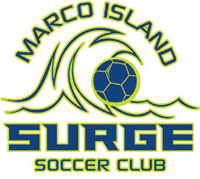 coaches.” Coaching coaches is an important aspect of developing any sports club.

Rob will be working with Mario Guzman, head coach for FC Collier youth and adult teams that have won tournaments across Florida. Not only are Rob & Mario very knowledgeable, both have a reputation for utmost integrity and being good with younger kids. Chadd continued, “The Surge Academy will emphasize development over being hyper-competitive. Get the kids out there playing with as many touches on the ball as possible. We are dedicated to teaching soccer skill fundamentals and team play in a fun, family environment for boys and girls (pre-school, pre-k, elementary, middle school and high school). Even with the youngest soccer players, the pre-K age range, it’s about coordination and fun. We don’t just do soccer drills, we offer Soccer Adventures.”

After meeting with Chadd and Amir Nadler, vice president of Marco Island Soccer, Rob said, “We hope to develop the youth and make this one of the best soccer organizations in SWFL.” Practices will be held on Mondays and Wednesdays at Mackle Park. “It’s never too late to sign up,” Chadd assures parents, “and kids are welcome to come both days or just one if that’s all their schedule permits.” To register, go to www.marcoislandsoccer.org or call Surge at 239-287-0536 with any questions.