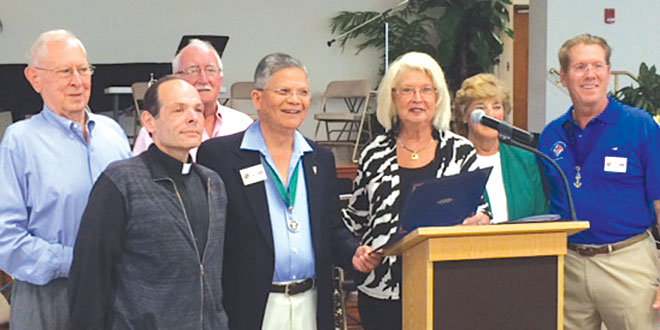 The Rotary Club of Marco Island has announced the recipients of the 2014 Spirit of Marco Island Award. They are Al Bismonte, Curt and Jacquie Koon, Ed and Kathy Miracco, Allyson Richards and Rosemary Wick.

This is the sixth year the Rotary Club of Marco Island’s The Spirit of Marco Island Award has been given to individuals and organizations that are civically involved through their contribution of time, talent and financial support of community causes.

Rachel DeHanas, president of the Noontime Rotary, made the presentation and acknowledged Bismonte for his many contributions to the community,

as well as his work with Bedtime Bundles, Meals on Wheels and the American Cancer Society’s “Road to Recovery” program.

Bismonte’s volunteerism extends far beyond the boundaries of Marco Island. A retired physician, he travels each year to his home country of the Philippines to host a weeklong free clinic for the underprivileged.

The Koons are the owners of CJ’s on the Bay, and were caught by surprise by the Spirit Award Committee announcement at their restaurant in front of a large crowd of guests enjoying live music at CJ’s outdoor gazebo. Since 2008, when the Koons purchased their restaurant, they have been actively involved in the Marco Island community. Over the years, they have generously sponsored numerous community fundraisers for local organizations through their financial support, as well as hosting many events at CJ’s on the Bay.

Currently, Jacquie is the president of the Marco Island Area Chamber of Commerce.

Both she and Curt have given countless hours of support to the Chamber in helping to promote local businesses.

Kathy is a past president of the M.I. Historical Society, and both have devoted countless hours to the development of the Museum and its continued success. They also are known around the island for their portrayals of Dr. Olds and his wife, one of Marco’s most recognizable pioneer families. In addition, they are actively involved with The Rookery.

Richards was announced as one of the honorees at a

Kathy Miracco reacts emotionally to the surprise announcement that she and her husband, Ed, have been selected as one of the Noontime Rotary Club’s 2014 Spirit of Marco Island Award winners. The presentation was made at the M.I. Historical Society’s monthly board meeting.

recent Noontime Rotary Club meeting. Richards was recognized for her volunteer work in the community particularly with the Greater Marco Family YMCA, where she serves as the vice president of ppecial events and president-elect. She also is a director on with the Marco Island Charter Middle School Board.

Over the past year, Richards spearheaded major fundraisers for both organizations, devoting countless volunteer hours. Under her leadership, both the YMCA and MICMS were able to raise money to fund their programs. She is actively involved in the community with several organizations, including the San Marco Catholic Church (where she serves on their Finance Committee), the Council of Catholic Women and the Newcomers Club.

DeHanas shocked Wick with the presentation of the Spirit Award in front of nearly 100 people at the Marco Island Center for the Art’s recent “2nd Tuesday of the Month Artist Reception and Gallery Openings,” noting thatWick has been instrumental

in the success of the Center of the Arts. Wick serves as the president of the board of the Center for the Arts, and is actively involved in the community as a member of St. Mark’s Episcopal Church, the Marco Island Women’s Club and past-chair of the Bach Ensemble.

Wick paid tribute to her fellow board members, who she stated deserved the credit. She acknowledged them for their hard work and commitment. She also recognized Hyla Crane, the Center’s new executive director, and predicted would lead the Center to new heights.

All recipients will be formally presented with their 2014 Spirit of Marco Island Award at a Gala Awards Dinner and Silent Auction to be held on Saturday, April 26, at the Bistro Soleil Restaurant in Old Marco. The proceeds from the event and silent auction will be used to support local charities and scholarships. For more information and tickets, contact Al Diaz at 239-438-5285 or by email at royalmarcoway@marcocable.com.