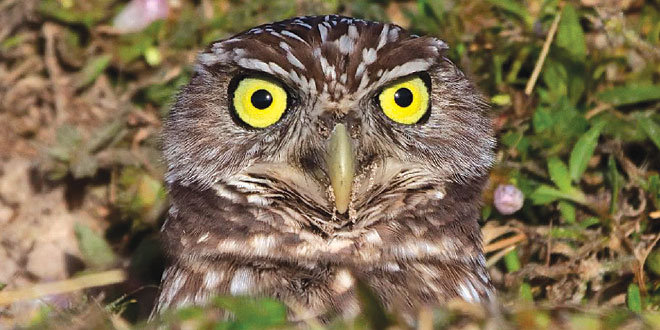 This past year, Marco Island’s environment had exciting conservation efforts and thrived despite increased construction and tourism and limited funding. It’s a precarious balance of people and the environment on this small barrier island in the Ten Thousand Islands, but with the community’s awareness and support, the wildlife and its habitat is holding its own. Looking back in 2013, here are a handful of projects that improved and maintained our environment:

Launched in 2012, this award-winning program has continued to improve steadily in both numbers and messages to protect the Marco Island beach. In 2013, the City of Marco Island’s Volunteer Beach Steward Program was recognized by Florida’s Chapter of the America Planning Association (APA) as a stellar grass-roots community initiative program. Thirty trained volunteers regularly walk the beach to provide information to beachgoers, report issues to the city (such as prohibited dogs, bicycles, holes and glass on the beach) and tirelessly pick up trash. They have, on a daily basis, improved our beach culture and environment for us and the precious wildlife. Their efforts have produced increase police patrols on the beach to improve public safety and assistance with injured wildlife and rescues. A win-win for people and wildlife.

Not a new concept, and fortunately one that anyone can participate in, the 2013 City of Marco Island’s Beach Advisory Committee provided the opportunity for local groups, clubs and businesses to volunteer and clean up the beach each month. Publix provided bags, gloves and bottled water each event with Marco Island Civic Association (MICA) on hand with their beach vehicle to assist with supplies, removal of the trash, debris and tired participants. Local businesses and clubs, such as, Mutual of Omaha Band, Rick’s Hair Salon, CJ’s on the Bay, Marco Island’s Woman’s Club, and MICA, sup-ported the 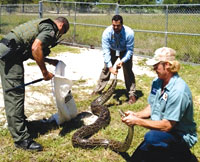 effort to keep our beach clean. What a difference they have made to the beach and at the same time had a great time. Interested in participating? Please call me at 239-389-5003.

• Straws on the Beach:

Well, one thing leads to another. During the 2013 Beach Advisory Committee’s monthly Beach Clean Ups, participants picked up, literally, thousands of large plastic straws off the beach. The black, large drink straws, laying on the sand or buried by the beach raker, covered the beach. When sea turtles would dig their nests, straws were seen in the deeper sand by the sea turtle monitor. With a proposal to amend the Beach Ordinance, the City’s Planning Board challenged the hotels and restaurants that provided these straws in drinks on the beach to clean up their act or straws would be banned — for good. In three months, straws were found in much lower numbers and hotels changed their standards and held staff accountable to pick up the plastic straws off the beach to ensure “only footprints are left on the beach.”

The nesting and hatching season of 2013 brought the highest number of nests — 93 — in over a decade of monitoring sea turtle nesting. With two major beach construction projects — South Beach Renourishment and the Hideaway Beach North Beach Renourishment — occurring in spring and the early part of the summer, Mary Nelson our dedicated and expert “Sea Turtle Lady,” was busier than ever ensuring each nest was protected and hatched. Her efforts paid off with 72 nests hatching.

Least Terns, Black Skimmers and Wilson Plovers nest on the Marco Island beaches between April and September each year. The Sand Dollar Island “spit” (formally designated as the Big Marco Pass Critical Wildlife Area, or CWA) was a hotspot for large 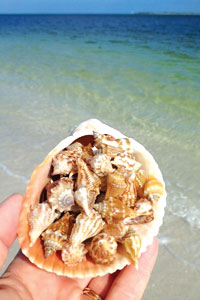 numbers of each of these three shorebird species which nested successfully. Volunteer Shorebird Stewards (local residents trained by Audubon to educate beach goers and monitor the nesting birds) were on the beach, armed with bird watching scopes and information on these shorebirds. More than 3,000 people were educated, improving the chance of survival for the shorebirds. Want to help? Go to www.flshorebirdalliance.org.

With 120 Burrowing Owl nest sites, no neighborhood on Marco Island is left out from having a burrow site. The year had the highest number of pairs nesting and producing young — 75 in 2013, producing approximately 216 owl chicks. Volunteers out monitoring and maintaining the burrow areas increased exponentially, which undoubtedly improved awareness and protection of our charismatic island bird.

After seven years and 14 districts, the city completed the STRP. The entire island now has access to sewer, and the septic tanks are eliminated. The final district was in the “Estates” section of the island — the hilly, upland area surrounding Indian Hill. This area is the habitat of the state-listed threatened species, the Gopher Tortoise. Installing the sewer infrastructure in the right-of-way area, the city with an approved Fish and Wildlife Conservation Commission (FWC) permit removed and relocated more than 100 tortoises. Over the six months of construction, no tortoises were harmed or removed from the island, conserving and protecting this unique population.

2013 brought the city of Marco Island $500,000 in grant funding from the BP Gulf Seafood and Tourism Promotional Fund to create two artificial reefs offshore Marco Island. The reefs are for creating habitat for offshore fisheries which in turn creates opportunities for recreational fishing and diving. The city of Naples and Collier County Government received similar funding. Working together, the three governmental

entities will create six new artificial reefs along the Collier County shoreline. Marco Island’s reefs will be approximately 16 and 27 miles offshore of the island. Constructed of natural coral rocks and clean concrete, such as culverts donated from FDOT and light poles from LCEC, each reef will be minimum of 500 cubic tons and ¼ by ¼ mile in size. Permitting through the US Army Corps of Engineers is almost complete, and deployment of the material and construction of the reefs is planned for the spring of 2014. The reef program plans construction of additional reefs in the future. For more information or to donate material or funds, go to www.cfcollier.org/artificial-reef-fund. Give enough, and you can name the reef.

Only Phase one of two of this Rookery Bay National Estuarine Research Reserve (RBNERR) project has been completed due to funding, but Robin Lewis, consultant for RBNERR, reports mangroves have started growing in the Steven’s Landing area, and it’s just a matter of time for the area to reestablish as a healthy ecosystem. Once funding is complete, Phase II will incorporate a channel cut on the south side of State Road 92 to improve hydrology, which will allow mangroves to reestablish in this area, also. For more information, go to www.marcomangroves.com.

The city of Marco Island’s Beautification Advisory Committee is always promoting the “right plant in the right place” and water conservation. This goes hand-in-hand with the concept of FFL. In 2013, the BAC planted Jane Hitler Park and the Calusa Park sign area with plants that meet this standard. The BAC also ensured the top 100 cul-de-sacs were cleaned up. Their annual Public Forum is a popular event with water conservation and FFL information to improve the island’s landscape for aesthetics and wildlife. Please attend 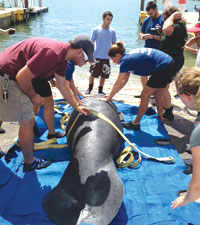 in 2014; it is scheduled for Feb. 11, from 1-4 PM at the Community Meeting Room (51 Bald Eagle Drive). For more information, go to www.cityofmarcoisland.com.

Red Tide, eutrophication of the toxic micro algae Karenia brevis, lingered in southwest Florida waters for more than six months in early 2013. A record number of manatee deaths in Florida occurred due to this harmful algae bloom. Several stressed manatee were in the island’s canals, but were rescued and eventually released by Mote Marine after recovery. In late summer, when tides change quickly, on different occasions, a dolphin and several manatees were caught in the shallow waters of Tigertail Lagoon. All were successfully rescued to swim away freely unharmed — thanks to many who reported and cared for the stranded animals until the tide turned. If you come across a hurt or injured animal, please call the FWC hotline at 1-888-404-3922 (FWCC).

As the Everglades and south Florida continue to see more invasive species creep into the environment, so does Marco Island. Green iguanas continue to be trapped and removed to ensure the native animals thrive. A large python was a huge (yes, huge) surprise at the waste water treatment plant on Mainsail Drive last spring. It was nesting in a pump box: 14 feet long, more than 100 pounds and gravid with 80 eggs. Caught and removed by city staff and FWC, pythons are a continuing nuisance in our environment.

This is just a short list of environmental endeavors on Marco Island in the past year. With the amount of volunteers and residents supporting the environment, 2014 looks to be just as successful. Get out and volunteer! Make 2014 a Happy New Year for our environment!

For more information on any of the projects or to provide comments, please contact Nancy Richie, City of Marco Island, at 239-389-5003 or nrichie@cityofmarcoisland.com